1,658 views • 10 upvotes • Made by rayzav 3 years ago in politics
democrat congressmen 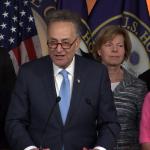 Caption this Meme
Best first
Latest first
Oldest first
8 Comments
RedBarron1
2 ups, 3y,
2 replies
"we do nothing"? Getting Rich off the public isnt "Nothing" but good point.upvoted
"You cant get rich in politics unless you are a crook" Harry S Truman
Giantsquonk
1 up, 3y
"If you have a job that requires you to lie to be successful , that's a shame" - Penn Gillette (He was joking about Magicians , but it fits)
rayzav
1 up, 3y
You're right, it should of said "we do shady shit"
Giantsquonk
2 ups, 3y,
1 reply My new Hero
enochthewatcher
2 ups, 3y
you saw that too eh?
stewart unleashed on congress.
how sad that it comes down to a comedian to publicly shame an elected body to do what is probably the biggest no-brainer politically speaking.
he had to do it with his show almost 10 years ago to even get this whole thing started,
so we can't even blame this new batch of representatives....this has been ongoing.

indeed mr stewart..indeed.
[deleted]
3 ups, 3y
It’s a good thing they do nothing as they are the most incompetent group of individuals to ever sit in that chamber
Taleladar
1 up, 3y
Well they whine, they race bait, and they continually attempt to destroy this country.
[deleted]
0 ups, 3y
Do nothing?? Screwing over the American people, bringing caravans of illegals into the country, working for illegals over Americans, non-stop Russia obsession. Democrats in Congress do plenty.
Show More Comments
Flip Settings

Caption this Meme
Created with the Imgflip Meme Generator
IMAGE DESCRIPTION:
DO NOTHING DEMOCRATS; WE DO NOTHING
hotkeys: D = random, W = upvote, S = downvote, A = back
Feedback