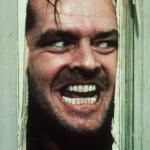 One of my favorite movies! I love Stephen King,& who in their right mind doesn't enjoy Jack Nicholson?!
I know King didn't like the way The Shining was presented,as Nicholson's performance made it unintentionally funny,(& domestic violence & child abuse,as well as family annihilation are NOT funny subjects)-so I see King's objection to how Kubrick let Nicholson interpret the role.
Kubricks vision is always strangely skewed,which is why so many of his films became cult classics. Even if the subject matter-madness,cabin fever,hauntings,domestic abuse,alcoholism,are rather unromantic subjects(well, you could argue that the haunting could be considered romantic, as each caretaker comes to love the OverLook for eternity!)
Its ALWAYS worth it just to watch Nicholson's classic performance,which was a sort of Valentine to viewers!
Show More Comments
Flip Settings