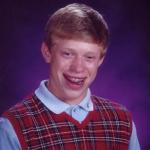 Jying
2 ups, 5y
Yeah I spammed that link around a bit, but I never intended to submit it so I had to share it somehow ;)
nopa
3 ups, 5y
The field goal is GOOD!
Jying
3 ups, 5y,
2 replies
I just don't get why it's a "popular" template. But then I spent a while making that image of him transferable just to make fun of it so I'm guilty as well ;)
Damon_Knife
3 ups, 5y,
1 reply
Yeah sorry. I've never seen it before.I was just messing with nopa
Jying
2 ups, 5y,
1 reply
I coulda swore I gave you a link when I was upvoting your stuff yesterday, no worries it's a meme site no need for you to apologize but I appreciate the gesture. I just drove home on solid ice for an hour going 15 mph and still sliding in 4 wheel drive. Had to mellow myself out a bit when I got home, nothing like the fear of some idiot slamming into you to make you feel alive!
Damon_Knife
3 ups, 5y,
1 reply
Cool .I had more comments yesterday than I've ever had before,So I could have missed it even. :)
Jying
2 ups, 5y
Been there! Somebody mentioned the other day they need a marker or something on the notifications list to tell you if you replied or looked at it. When you have more than 10 when you log on and then start getting live ones it's really hard to keep track.
nopa
2 ups, 5y,
1 reply
Jying
2 ups, 5y,
1 reply
nopa
1 up, 5y,
1 reply
Spongebob has some jokes geared to adults so we have that going for us.
Jying
1 up, 5y,
2 replies
You know more potheads watch that show than kids do lol. I homeschool so I have to watch how much the little man watches tv and to what he is watching. Kid loves space and nature documentaries so I guess it's working. His sister has been acing college classes since 16 so I'm doing something right ;)
nopa
1 up, 5y,
1 reply
Jying
2 ups, 5y,
3 replies
That girl raised me as much as I raised her lol. Somehow I managed to impregnate two women who are unable to feel an attachment to their children. Feminist like to complain about equal wages, try being a male and getting any form of child support from a female in Missouri. Males get their wages garnished and even locked up for it, my lawyer laughed at me and told me to be happy they didn't fight me for custody lol!
nopa
1 up, 5y,
1 reply
Jying
0 ups, 5y
Yup, the lady I see now lives almost 3 hours away and we are keeping the kids out of it for now. It works though we have trust and when we are together it's never a bad time.

Think both of us are scared to jinx it lol. My lil man gets all my focus right now his mother just had another baby and missed his birthday and Christmas without so much as a phone call. He's not missing her and is happy so I'm no longer going to pressure her into spending time with him anymore. Not my job to remind her about the thing that should be most important to her ya know...?
nopa
1 up, 5y,
1 reply
I hear you. I have two step-kids and their dad threw peanuts for child support for a couple of years. My wife didn't want to press the issue and he occasionally took the kids so we were civil. The kids are grown and happy in their lives. We're empty nesters and happy too.
Jying
1 up, 5y
My daughters mother had a 7yr old when I married her at 19. I did my best to be his father for 7 yrs before she ran off on my daughter and I. Wouldn't let me keep him though, that woman took that boy away from so many different people that loved him I am still her longest relationship to date.

He found a family in the armed forces she can't take from him. He will always feel like a son to me but I think he resents me for not being able to save him like I did his sister. I had no rights, broke my heart.
nopa
1 up, 5y,
1 reply
I can't reply to your last comment, so I'll do it here. With time I hope your son will come to the realization of how your hands were tied. I had a tough time with my step-daughter (teen years especially) but we're pretty good now. I think she had doubts about me and her mom but we're coming up to 30 years.
Jying
1 up, 5y
I don't think my daughter has liked anybody I've ever dated lol. At my age every single woman has kids and most likely a story about some jerk that screwed them over. Last one I dated had been married for 17 years to a cheating drunk that left her with 3 kids to take care of.

Caption this Meme
Created with the Imgflip Meme Generator
IMAGE DESCRIPTION:
PROVES THE EARTH IS FLAT; FALLS OVER THE EDGE
hotkeys: D = random, W = upvote, S = downvote, A = back
Feedback