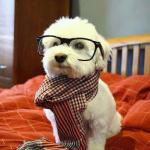 I had a Lab x boxer x rottweiler (most likely - lab was abou1/2) who lived to be 16 or more. Every once in a while she would Indulge and take advantage of my absence to eat some of my food...and several times she ate more than a half a box of See's chocolates. I worried but never saw any negative effects. She was a bit mischevious - and smart as a whip. She understood EXACTLY what people were saying at all times, could tell when we were speaking about her - even in code. Spelling words like w-a-l-k didn't even work.
reply
AndrewFinlayson M
1 up, 3y
Had a dog in the 80's who was crazy about riding motorcycles. He could climb chain link fence, one time he broke himself out of the dog pound and found his way home. Talk about a smiling dog.
reply
[deleted]
1 up, 3y,
1 reply
reply
Wokadee
1 up, 3y,
1 reply
reply
[deleted]
1 up, 3y
reply
DashHopes
1 up, 3y
reply
[deleted]
2 ups, 3y,
1 reply
reply
Wokadee
1 up, 3y
obviously
Show More Comments
Flip Settings
memes
gifs
other

Caption this Meme
Created with the Imgflip Meme Generator
IMAGE DESCRIPTION:
Life is like a box of chocolates; It will kill you
hotkeys: D = random, W = upvote, S = downvote, A = back
Feedback
<![endif]-->