And The Jokes Are Being Written, As We Speak... 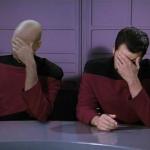 Caption this Meme
Best first
Latest first
Oldest first
4 Comments
KyleStewart
0 ups, 6y,
1 reply
It is kind of ridiculous, but he is going to face 4-8 years of biased media scrutiny so I see where they were coming from. And to be fair this was actually one of Obama's last big self defense moves, claiming the media never did him justice, when in reality he and Hillary received free passes from most major media outlets. my .02
BlackATTACK
0 ups, 6y,
1 reply
Oh I don't know about "free passes.." Hillary much more so than Obama. He got raked over the coals for Syria by the press, was ridiculed by half the media for the ACA, and was left to fend for himself against the Republicans, without the media putting negative pressure on Congress to work together.

So yeah, I'm gonna disagree a little bit. Trump got over a billion dollar's worth of free publicity and air time as a presidential candidate; I don't feel sorry for him at all. He's unlikely to survive two years in DC without being impeached. His business ties are a threat to national security. And if you think that Congress is just gonna gloss that over, Reps AND Dems, then think again. Basically, they're just waiting for him to leave a paper trail and make a few f**k ups. I've been monitoring this "conflict of interest" concern for weeks now. The minute they can prove he's intentionally profiting from misusing his authority and influence as president? You're gonna see sparks fly, and him leaving for New York, Nixon style.

But I hear your 2 cents. And raise you a nickel. ;)
KyleStewart
0 ups, 6y,
1 reply
That's assuming there is concrete evidence of intention. The precedent with Hillary and being allowed to be the democratic candidate - mainly their party - not caring about her email server, Benghazi, and the rest of her BS. The government is not going to run the same way it did under President Obama.
I don't think they will land anything and it is all going to blow over just like the many media attacks on Trump
BlackATTACK
0 ups, 6y
You think questionable ties to RUSSIA are gonna blow over?

Caption this Meme
Created with the Imgflip Meme Generator
IMAGE DESCRIPTION:
Trump gets inaugurated 45th President of the United States on January 20th, 2017:; One of his first actions as President: Complains about the media's accurate report of his smaller crowd size.
hotkeys: D = random, W = upvote, S = downvote, A = back
Feedback