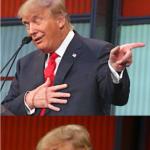 Hint: the EOB which ruled over those years about whether to classify or not states that if there is a doubt, do not classify.
Treehorn316
8 ups, 6y,
2 replies
http://www.foxnews.com/politics/2016/06/11/despite-clinton-claims-2012-email-had-classified-marking.html
PhalseProfit
9 ups, 6y
Careful Treehorn, liberals always get pissy when you prove their "facts" are not true. imgflip.com/i/zk9q1 While I am sure more evidence will come out I don't think the Classified e-mails were the main reason for the mass deleting. It was because the private e-mails would have exposed the money laundering and corruption and bribes of the Clinton Foundation.
[deleted]
5 ups, 6y
Fox news .-.
Diskatopia
2 ups, 6y
*EO, not EOB
renegade_sith
8 ups, 6y
I'm not sure why you're so adamant about defending her. Anyone can see that she's a crook.

Let's discuss her character, shall we? In 1975 during her first case as an attorney, she defended a 40 year old man accused of raping a 12 year old girl. The prosecution made a mistake and threw away the key piece of evidence. She took advantage of this, and even went as far as to call the victim a liar. She got the rapist's sentence reduced from 30 years to only ONE. Now she's been caught on tape bragging abour her victorious case and laughing about it.

www.freebeacon.com/politics/the-hillary-tapes/
sweetP
6 ups, 6y
She deleted 30,000 emails that had yet to be classified. That's high treason.
Rinoazelda
7 ups, 6y
[deleted]
9 ups, 6y,
3 replies
It's a funny joke..... but still a repost :/
PraytheReyAway
14 ups, 6y
DerpyChik
5 ups, 6y
Dude..... literally? I'm getting tired of all the people who be like: ITS A REPOST
renegade_sith
8 ups, 6y,
1 reply
What's your point? I chose the template to put the joke on. Try contributing a relevant comment next time...criticizing other users won't get you very far.
BawsJaws
2 ups, 6y
He's just a troll. He commented "REPOST" on a couple of my images, when they weren't.
LeprechaunJesus
4 ups, 6y
Good one
[deleted]
6 ups, 6y,
1 reply
LOL...as a liberal I laughed at this....
[deleted]
4 ups, 6y
Me too :)
[deleted]
3 ups, 6y
[deleted]
4 ups, 6y
[image deleted]You can see it in their eyes....
[deleted]
3 ups, 6y
[deleted]
4 ups, 6y,
1 reply
XD Awesome!!!
[deleted]
1 up, 6y,
1 reply
Totally unqualified.
[deleted]
4 ups, 6y,
1 reply
And Trump is qualified?
low rated comment (click to show)
[deleted]
1 up, 6y,
1 reply
[deleted]
0 ups, 6y,
1 reply
[deleted]
2 ups, 6y,
1 reply
Clinton is not my first choice, but to say that Trump is more qualified than her, for example, is like saying that frying a fish with water in the pan is better than using actual oil.
[deleted]
1 up, 6y,
1 reply
No actually it is not. You just don't know anything.
[deleted]
0 ups, 6y
If that's the case, then you don't know anything either. Clinton is not my first choice, like I previously said. I am not a die-hard leftist liberal; I consider myself a moderate and I do read NYT, Washington Post, Reuters, etc. Therefore, having you tell me that I don't know anything is an insult, but hey, it only makes you seem more absurd. If I don't know anything, then what do YOU know, huh? Trump has never held political office. He made his fortune in real estate (I'll give him that, although the mafia and the small loan of a million dollars from his father definitely helped), but he failed in his other business ventures. That is not the man who I want as president. I do not want a man who has accused President Obama of being a Muslim from Kenya, and I do not want a man who has utilized Judge Gonzalo Curiel's Mexican ancestry to put him in a negative light. Maybe you are the one who should think things through. At the very end of the day, if you want to vote for Trump, I can't stop you. However, you have no right to tell me that I don't know anything. That just makes you stoop down to a lower and less respectable level.
Show More Comments
Flip Settings

Caption this Meme
Created with the Imgflip Meme Generator
IMAGE DESCRIPTION:
HILLARY ISN'T QUALIFIED TO BE THE FIRST F PRESIDENT; I MEANT TO SAY "FEMALE" BUT THE "EMALE" GOT DELETED
hotkeys: D = random, W = upvote, S = downvote, A = back
Feedback