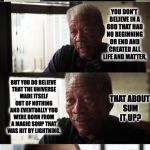 When what they said in school really sticks... in fun
reply
Jesuskid777
1 up, 4y
I understand what you are saying, I'm just trying to let people know that from the telescope to the microscope, the Bible and science are not enemies.
When what they said in school really sticks... in fun
reply
Jesuskid777
0 ups, 4y
If God did truly created the world, then it would have been new when He made it. Over time it show signs of wear and tear. It would get worse not better and even with the help of its inhabitants, it's clear that the world is not getting newer it's getting worse. So then A God created earth holds up to the laws of Thermodynamics. This is just one "Scientific Method" of known science that a God created earth holds up too, and there are many, many more.
Let's look at the evolutionary theory with the same law. Remember this is "Creation Science". Our cause may be different, Example: God or Random Process, but we are studying Creation. Evolution has some problems with the laws of Thermodynamics though. Because it's cause actually asserts that in started in a disorderly state and worked into an orderly state. That contradicts the same science that non Christian scientists have studied and determined to be empirical science. Nothing we see today goes from disorder to order without an external cause. Dishes can sit dirty in a sink for 40 years, they will only get worse the longer they sit (this is called entropy). The only way they will become organized is if someone does them. The theory of evolution has failed a scientific method test, that a God created idea passed. The reason you say Creation Science is not Science is because you want to see God and shake his hand before you believe in Him. You want me to prove God exists, I say He already told you he exists by the proof of a world that is uniquely designed so that you can live in it.

If it is designed then it had to have a designer. I wish I could walk you right up to God and say here He is, but I can't. He reveals Himself to who He wants too. In the Bibke He says that you know in your heart He's real, but you deny him because of your own willful and sinful desires.
You will choose a deliberate lie that is not supported by the science you asked me to provide. God is who God is, i answer to Him, he doesn't answer to me. I can't make Him come down here to do some parlor tricks so you can believe, either you believe or you don't, He gave you the ability to choose for yourself, I've made my choice, apparently you've made yours...your worldview is small and limited and I expect you'll say it's not, but I'm not here to talk about God to anyone who doesn't want to hear about Him...if you are offended by Jesus, just skip over any of my comments because I'm here for those that want to know.
When what they said in school really sticks... in fun
reply
Jesuskid777
0 ups, 4y
Christians believe that God created the universe and all that we see. So, using the scientific method we study the evidence to see if that claim is true, based on known ""Science" techniques, like Physics, Thermodynamics, Biology, and a list of many other Scientific Methods. This information available from science breakthroughs is not all generated from Christians. Christians use the research of all scientists regardless of religion, sex, ethnicity and so on. Science is science.

Christians didn't write the laws of Thermodynamics, but we compare the creation to them, just like an evolutionist would compare his model. It just so happens that the God creation account does not fail under scrutiny with scientific research, for example Thermodynamics...Thermodynamics say that things go from order to disorder. When something is created say a car for instance. The car is in pristine condition shortly after it is made, but in time the car will start to deteriorate. It will get worse with time not better.

The only way the car will stay pristine is with help from a third party (the owner of the car) but even with the owners care, parts will still wear out over time. They don't get better with time they get worse. This is science we can observe today. Have you ever had anything new that got newer the longer you've had it? No, of course not.
When what they said in school really sticks... in fun
reply
Jesuskid777
1 up, 4y
Hmmmm....Lets see "Creation Science" is not Science? Let's see if that holds up. Evolution says that the world was created in a certain manner, isn't that "Creation Science". In other words studying the process of how the world was created. Therefore again it is Creation Science. "The study of the Creation", because I believe in God you say Creation Science is not Science at all. I disagree. The Bible tells us that God created the world, but still the same rules apply. The laws of Science still have to apply. The scientific method does not change because of your presupposition.

Somehow people assume that If we say God Created then it automatically somehow fails when compared with scientific observation, but actually it holds up quite well under scientific scrutiny. Let's agree that no human was present at the creation.

It doesn't matter if it was evolution or if it was God, no one was there to see either one. So now that we are on the scene and with the intelligence an information we have we want to know our origins. So we employ science to study what we have on hand to see how it all began. This is "Creation Science" again the study of creation. It doesn't matter your viewpoint at this time because the "Science" or study will help you towards a conclusion.
When what they said in school really sticks... in fun
reply
Jesuskid777
0 ups, 4y
I agree to disagree...you have your position and I have mine, they can't both be right, which I "intend" to imply that one of us is wrong...you say me, I say you. You have people that agree with you, I have people that agree with me. We could spend the next year going around in circles, but let's not and say we did, t-shirt and move on.
Feedback
<![endif]-->