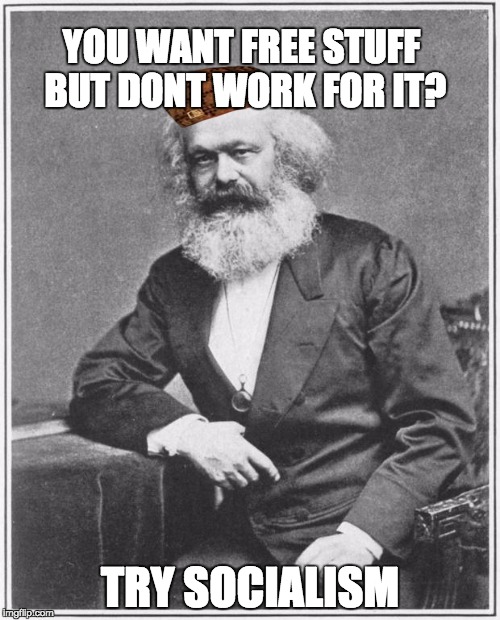 reply
frogguy
0 ups, 4y,
1 reply
Thats not what capitalism does, thats what people who take advantage of capitalism and play god do.
reply
Drogash
1 up, 4y,
1 reply
I agree with that, but we could also say the same about socialism in your meme. It doesn't have to be that way, in fact it didn't always. Like in Yugoslavia, or in Scandinavian countries, they were more like socialism during the cold war than like modern day capitalism. Nevertheless, I am not for socialism, I think capitalism of some sort is better, but I jut disagree with that blunt perception how socialism is bad and capitalism good.... Not sure do you think like that, I just commented the meme I've seen. :) Socialism, the type of it what ve've seen, is not working. Capitalism, this one we have now, is not working either. I mean it works but the cost of it, the cost to humans and to the environment is too high. We should change it, and implementing some methods that were used in socialism could actually make it better.
reply
frogguy
0 ups, 4y,
1 reply
I see your point there. Tito in Yugoslavia was known as the "Good Communist". The thing i don't like about it particularly is the concept of certain programs in a socialist government like health insurance (Im not against health insurance to begin with) is the idea of paying more taxes for people who destroy their lives with drug addictions or alcoholism and making others pay for their recovery (through taxes). Socialism can be good but if one were to be willing to aid those in need, not forced by a government.
reply
Drogash
1 up, 4y,
1 reply
Hm... I guess you could make some kind of a system for that, for example in the college education. It is terrible thing to study like in the US, to be forced to repay your student loans for 15 years or so... For example, you could make a system in which everyone would get free education for a start, but if you fail two years, than you have to pay for it. I think it's like that in Croatia now. And for example, in Denmark, you actually get paid by the state to study. You get money for studying. And Denmark is doing good, it's one of the most prosperous countries in the world for a fact.

I think that's doable because we earn it for a fact. Most of us in capitalist countries are actually being ripped of and they convince us that it's perfectly fine, that's how it should be. So you end up with people believing that it's more important to defend 'the freedom' of the people earning billions than to actually tax those people properly and provide their workers with decent salaries, health insurance, or to give some minimum social care for homeless or poor people.

Some people are responsible for their failures, some are not. You can't blame people coming from abusive families and stuff like that for being drug addicts. I mean, you shouldn't give them loads of money, but some kind of care or addict programs should be payed by the state. Just as people who succeed also owe it to the society, cause we're all a part of the society. If they earn millions or billions in fact they should get bigger taxes. And not to mention that we could actually solve all the problems in our countries with the money we would rightfully get by taxing them.
reply
frogguy
0 ups, 4y,
1 reply
Firstly, I see your example of the free college, but who is going to pay for it? I understand "The State" would pay for it but where do they get the money - our taxes. I don't want to have to pay for some college freshman's education. Getting my education is MY responsibility, not some taxpayer. Secondly, getting a loan and not knowing you have to paying it off is pretty irresponsible. Thirdly. If you've been ripped off by some corporation, don't do business with them.
reply
Drogash
0 ups, 4y,
1 reply
What I mean when I say ripped of, I mean that a worker works for little money, gets frustrated, lives worrying about his children, generally lives with little money and worries because of it while his owner or the manager stuff get philthy rich because of that. Yes, we would pay for the education. I am fine with my money going to taxes and paying for somebody's education. We all benefit from educated people in the end. I simply think students should be able to educate themselves, if a student comes from a poor family, he has the right to get education just like a student coming from a rich or not to say super rich family. So, actually, again, by taxing the richest parts of the society, who are ridiculously undertaxed, you would actually get money for good education for all your population. As I've said, the living standard in Denmark is higher than in the states. And they pay the education for their people and yet they have much less money circulating through their country. If USA would tax its highest and second highest class as Danish do it, you would have be a country with the best living standard in the world.

What we have as human rights should expand to economic categories, and we should have much bigger minimum wages then we have them now, better and cheaper education that can be provided to all people who have marks good enough to go to college, and we should have social care programs for homeless or unemployed people. And that's doable, there is enough money for that in the world, actually there is much more money than it would be necessary for that. Now, we should also have programs to find some kind of work for homeless and unemployed people, now those are technical things and should be broadly discussed, and this is not the site for that. But they should definitely have social care.
reply
frogguy
0 ups, 4y,
1 reply
Ive looked into the "Socialist Denmark" you have been mentioning before, its not what you have been claiming.

The Scandanavan countries actually have more freedom for capitalistic bankers than the US and are backed by Norway's oil claims. There are also higher suicide rates among those countries.

http://www.americanthinker.com/blog/2012/11/a_toast_to_socialist_countries.html
Drogash
0 ups, 4y
That's a lot of articles my friend. I've been in Denmark, talked to people, the state gives them money to study, that's a fact. But about other stuff, I am aware of that. Scandinavian countries tax their middle class and lower capitalist class a lot, that's a mistake if you ask me. They should tax them less but tax the banks and super rich more. About other stuff I know about suicide rates, they say it's because of the climate. Not sure if it's that, but still, they have good social care programmes. But I wasn't referring to Scandinavia as an example of what we should do, although in some cases they are. I've read about Sweden and talked to people in Sweden, in lot of things about Sweden in the 50ties or 60ties, americans would say they're socialists. Now it's a bit different, but they still have more or less what you could call a social capitalism. I will check the articles you gave me later, I am busy now.

But nevertheless, Scandinavia was not my point. Capitalism should change in general, everywhere. And it's doable, if we just have the guts to do it. To demand change, to make change. And to be change ourselves, as Gandhi would say. If you want to see my point, it would be something alike Syriza in Greece, their program. They are not exactly what I would want, but they would definitely go in my direction. But I'm saying about their programme, not the actual things they did when they were elected.

Here is a simplified version of their programme: http://links.org.au/node/2888

Now, I think taxing people earning over 500 millions with 50% of their income is too much, but something like 20% percent would be what I have in mind. Because that's ridiculously small amount of money for them, while you could make miracles with it. And, morally speaking, I think the state has the right to do it. Because they didn't come from Mars and made that money there, that money is earned in the society, they were formed in the society, they gain big benefits from the society and they should, thus, give more back. And they could still be super rich with those taxes given.

About else, you can check out the Syriza's former minister, Yanis Varoufakis site. He left the government because they betrayed their programme. Here it is: http://yanisvaroufakis.eu/
reply
Forman
1 up, 4y
obamacare
reply
firstonetodinner24
0 ups, 4y,
1 reply
Boo, this meme sucks !
reply
Turabi
0 ups, 4y
K
Show More Comments
Flip Settings