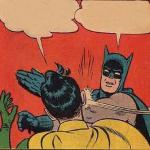 Caption this Meme
Best first
Latest first
Oldest first
8 Comments
jrcampbell
1 up, 7y
It's like saying, "If Yorkies came from wolves, why are there still wolves?" Lol
HaHarmageddonTV
0 ups, 7y
I'm a theist, but I know the "answer"; the Australopithecus was responsible, apparently.
OhioGTO
0 ups, 6y,
1 reply
Pity how basic math destroys evolution. No. of possible human DNA combinations:

That is the approx number of iterations per second for evolution, starting on day one 4.5 billion years ago, to resolve a modern human being.

To illustrate scope further, one estimate of matter in the universe is: 3x10^52 kg.

That is one DNA molecule of over 20 million organisms with DNA, not including environmental development.

This is not an argument for a massive linear process. It merely demonstrates the scope of what has to happen at what approx rate for evolution to be possible.
jrcampbell
0 ups, 6y,
1 reply
Oh man, my apologies for not noticing this. Your equation doesn't take natural selection into count. Evolving doesn't access require every combination of DNA. Not even close. All that is required are the combinations that work. Natural selection causes this to happen very rapidly, as the creatures with only the most advantageous DNA combinations survive, creating an already established combination to build from for the next generation. The math isn't as you say.
OhioGTO
0 ups, 6y
I did mean to suggest the math is inflexible. In addition to your point, we see 6 billion variations walking the earth today without the benefit of progressive evolution for each unique human. So it's clear the math is overstated in some regards. However, it's also understated in that a drastic reduction in the "processing speed" to, say, 1 per day, is still light years faster than the theory of evolution allows. DNA complexity is also a matter of ongoing discovery. Not so long ago, science spoke of "junk DNA." Now they know it's not junk. Just so, we only know the knowns of DNA; we do not know the unknowns. But we know that 4.5 billion year window is fixed.
Invicta103
1 up, 7y,
1 reply Caption this Meme
Created with the Imgflip Meme Generator
IMAGE DESCRIPTION:
IF MAN CAME FROM APES, WHY ARE THERE STILL APES? READ A BOOK!
hotkeys: D = random, W = upvote, S = downvote, A = back
Feedback