What Do We Want 3 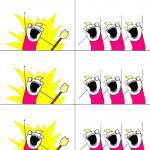 reply
imgflip_master
0 ups, 6y
thankyou kind sir
reply
InfernoKid-Sandstorm
1 up, 6y,
3 replies
Too bad this has involved from a hilarious meme site to political cancer forum. I've been here for a year and I miss the old imgflip...
reply
BanALLTheTrolls
5 ups, 6y
Yeah, I've seen the older memes--not one mentioned politics, surprisingly. And yes, some were pretty inappropriate--specifically, one Insanity Wolf (I never see those any more... what a shame)--but hey, that's what makes it fun, right? And everyone worked together to fight trolls, and gifs were actually funny, and people didn't rant on and on about stuff no one car--
Oh.
reply
[deleted]
0 ups, 3y
i agree
reply
[deleted]
0 ups, 6y
I haven't been here for a year,but so,far I've noticed all memes that get on the front page are one about complaining not being on the front page or about politics or their just plain stupid
reply
PraytheReyAway
0 ups, 6y
reply
Chov
1 up, 6y,
1 reply
reply
InfernoKid-Sandstorm
0 ups, 6y
I am racist and I find this Jewish
reply
AishahSchwartz
0 ups, 6y
This has continued to make me laugh three weeks after finding it. hhhh Thx.
reply
[deleted]
0 ups, 6y
reply
RaisingOldSouls
0 ups, 6y
reply
The-idiots
0 ups, 6y
When do we get it

On our worst memes*

too many times I make a good one and one of my bad ones gets to the front page ;-;
Show More Comments
Flip Settings
memes
gifs
other

Caption this Meme
Created with the Imgflip Meme Generator
IMAGE DESCRIPTION:
WHO ARE WE? MEME MAKERS! WHAT DO WE WANT? OUR MEMES ON THE FRONT PAGE! WHEN DO WE GET IT? NEVER!
hotkeys: D = random, W = upvote, S = downvote, A = back
Feedback
<![endif]-->