Your opinion doesn't apply to everyone... 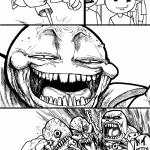 Caption this Meme
Created with the Imgflip Meme Generator
IMAGE DESCRIPTION:
HEY ANTI-ABORTION PEOPLE JUST BECAUSE YOU DON'T PERSONALLY AGREE WITH IT DOESN'T MEAN YOU CAN BAN IT FOR EVERYONE
hotkeys: D = random, W = upvote, S = downvote, A = back
Feedback
<![endif]-->