This is more of a joke about this being all dudes in the 80s vs. opinions of today - I def support women's rights. share
16,842 views • 45 upvotes • Made by IdrinkthereforeIam 6 years ago
memeslaughing men in suits 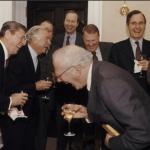 reply
IdrinkthereforeIam
2 ups, 6y,
1 reply
The joke is in the meme. It might just be hard to grasp the entire context without the title. Still love you though.
reply
whitewolf448
0 ups, 6y
yeah i wasn't thinking about it correctly until i read the title lol
reply
[deleted]
0 ups, 6y reply
Orcoaba
0 ups, 6y
Women have way more rights in the US... The only right men have that women don't is the ability to go topless in public. Everything else is women...
1. Women are protected from conscription. Men aren't.
2. Girls are protected from infant genital mutilation by law; boys aren't.
3. Women receive lighter prison sentences for the same crimes.
4. Young single females now earn more than young single males (although this is a performance issue, not a rights issue) and the evidence of this is that they are the #1 home buying demographic in America.
5. Women are now 60% of college graduates, vs 40% and dropping for men (again, this one's a performance issue, caused by public perception of the 90's myth propaganda that boys were doing better in school when they weren't, so education and attention to girls was essentially emphasized as a result)
6. They not only have complete control over their own reproductive choices, but the way divorce court, child support, etc. is set up, they also have control over a few facets of the opposite sex's reproductive rights. A woman can choose to keep the child and make the man pay, or drop the child off at a fire station under the Baby Moses laws anonymously without the man's input. The woman can choose to carry a pregnancy regardless of whether the man wants the child, and then make him pay for it if he didn't want it.
7. Divorce court rewards the female in the majority of cases.
8. Women consume the majority of entitlement program expenditures.
9. A male who injures himself before military deployment or does not wear sunscreen and gets severe sunburn can be court marshaled because his body is government property, whereas a female can deliberately become pregnant before or during deployment and will be removed from the war zone without reprimand.
10. A woman can physically abuse her husband and it is more likely the husband will go to jail for it than she will.

Caption this Meme
Created with the Imgflip Meme Generator
IMAGE DESCRIPTION:
AND THEN SHE SAID, "WOMEN HAVE RIGHTS TOO!"
hotkeys: D = random, W = upvote, S = downvote, A = back
Feedback
<![endif]-->