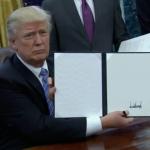 Caption this Meme
Best first
Latest first
Oldest first
12 Comments
AmericanViking
0 ups, 2mo,
1 reply
but they were looking for a huge bombshell that implicated the FBI in spying on Trump...
CharlesHebdo
1 up, 2mo,
1 reply
Yep, Like him holding on to Signal Intelligence and Nuclear Secret documents. The only reason for him to not return those at this stage, would've been to sell 'em.
If they found anything truly secret at Mar-A-Lago, as suspected, we need to figure who's gonna be selected for the firing squad.

Remember when he said spying was punishable by death ?
AmericanViking
0 ups, 2mo,
1 reply
Yup... the security footage caught the FBI's illegal actions... LOL
CharlesHebdo
1 up, 2mo,
1 reply
And there you go again making up wishful shit. You thinking its illegal doesn't make it so. I have come to think you truly believe all the conspiracy lies you write about. I totally expect you to come back saying FBI went to plant the secret documents they -might have- found at Trumps'
Is your last name Kaczynski by any chance ?
AmericanViking
0 ups, 2mo,
1 reply
LMAO... sure... nobody was allowed to observe the FBI's actions for hours... nothing says more as to their true intentions...
CharlesHebdo
1 up, 2mo,
1 reply
Tell me then whats the SOP for an FBI raid...
Should they have started by allowing all the trumptard lookyloos to come inside the perimeter ?
Call OAN so they would broadcast a blow by blow on each drawer opened ?
Did you even know the agents with masks are NOT Ninjas ?
AmericanViking
0 ups, 2mo,
1 reply
row row... row your boat... covering for the corrupt FBI...

it's not like they had to undergo anti-bias training more than once...

Caption this Meme
Created with the Imgflip Meme Generator
IMAGE DESCRIPTION:
There are no WMD’s; At Mar a Lago
hotkeys: D = random, W = upvote, S = downvote, A = back
Feedback