all jokes aside, how do you think this fight would go down? (mod note: proto art by Jting-F on youtube) 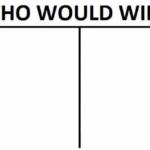 Caption this Meme
Best first
Latest first
Oldest first
53 Comments
Freya_The_Demon
1 up, 3mo,
1 reply
All I know is that there wILL BE BLOOD
SHED
Cyke
0 ups, 3mo,
1 reply
I think you mean "the only thing I know for real"
Freya_The_Demon
1 up, 3mo
Yeah-
UwU_Monster
0 ups, 3mo
depends
Partisan.
0 ups, 3mo
Glory.
UnknowngoestoArea51
0 ups, 3mo
As a weakest male human, i say the former wins.
RodimusKujo
0 ups, 1d
Sam he can slice a modified Metal gear Ray without himself having Cybernetic enhancements.
[deleted]
0 ups, 3mo,
1 reply
the brazilian
0blitzkriegbrigadeir0
0 ups, 3mo
yes
Butterscotch_the_Protogen
0 ups, 3mo,
2 replies
keeping in mind that protogens are very hard to kill and the strongest (the rare type) can manipulate their visor, the protogen would probably win and only have minor damage to their visor. (and to note: I said probably)
0blitzkriegbrigadeir0
0 ups, 3mo,
1 reply
ok here's a better reply

so jetstream sam has a few distinct qualities that i'd like to point out
1: he can parry 20mm machine gun bullets with relative ease [and get close enough to slice through an armored car]

2: he CAN slice through nanomachines [as seen in the fight with Armstrong in the Jetstream DLC]

3: his sword apparently channels lightning, which is not good for beings that have electrical components or can conduct electricity [for instance, 1 hit = fried protogen]

With these things to look at and other various combat advantages Sam might have, i'd say they're evenly matched, but the thing about furry fighters for me is that they usually have a larger profile and their tail can sometimes prove to be their downfall

2. I'd say the protogen, if they're meant for fighting which appears to be so then chances are when they were created they were genetically modified to be stronger and such. And humans only develop skills, no one is really born with/has time to become the greatest at something
Partisan.
1 up, 3mo
I'm betting 120 credits on the Brazilian with a murasana, your crappy genetics better not outlive good ol' brute force.
OneSpoopyMoth M
0 ups, 3mo,
1 reply
I've tracked down the protogen art to be a screenshot from a video made by Jting-F on youtube

the name of the image will be edited to credit the artist, please credit all art you post in the future. Thank you for participating in the furries stream.
AquaSpider M
0 ups, 3mo,
1 reply
Can confirm. Looks like they do 3d modeling
OneSpoopyMoth M
0 ups, 3mo,
1 reply
yeah they also do other stuff, they make super high tech protogen fursuits which I think is cool as hell
AquaSpider M
0 ups, 3mo
Nice!
0blitzkriegbrigadeir0
0 ups, 3mo
we are talking about jetstream sam here.
Show More Comments
Flip Settings