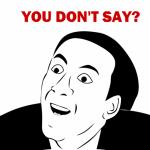 Here's a fun one for you, people who cannot vote (underage) could have followed him, as well foreigners (such as foreign press). Many followed him just so they could be notified if he posted, which would allow them to reply with poison.

The bots Elon is hunting are those that people are paying for in order to inflate their follower counts.

You see it all the time, celebrities and brands with millions of followers only getting a few thousand likes on their tweets. Those are bots - there to inflate follower counts.

Another type of bot autoreplies to any tweet from an account it follows. This is why you see replies to Donald Trump Jr's tweets that appear seconds after he makes a tweet.

More than half of my followers are bots, trying to sell me something right after they follow. Some are sophisticated, most are not.

The equation is much more complicated than 80-60=20.
lokiare
3 ups, 2m,
1 reply
Twitter also has bots to inflate their numbers for advertisers
WiseCracker
1 up, 2m,
1 reply
That might be their downfall. Lying in an SEC filing might cause legal trouble, and if the advertisers decide it's fraud - whew, they're screwed. I hope it all goes down before Musk completes the purchase. Federal and civil suits pending will seriously impact the value.
lokiare
2 ups, 1m
Yep. Of course I don't expect the SEC to do anything as it would cause a huge dip in value to a major utility, causing ripples in the economy.
low rated comment (click to show)
tRump_needs_a_diaper_change
0 ups, 2m,
1 reply
WiseCracker
2 ups, 2m
You couldn't possibly hope to offend me
Show More Comments
Flip Settings