Take this upvote and have a good day 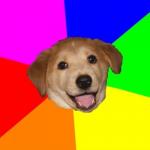 [deleted]
3 ups, 3m,
2 replies
energeticbombhands
3 ups, 3m,
1 reply
Now, now, let's layoff the insults. After all, you are saying he's a kid, so, maybe he's still gotta learn how to meme correctly
JAMESLORDTHE7TH
2 ups, 3m,
3 replies
exactly. He is a new user that doesn't know better, but they are the reason this meme exists, and is getting more popular by the minute. We sometimes need to just kill the supporters. I showed no mercy to a new memer, and it was because he didn't take my advice for proper memeing. He kept making beggar memes and refused my warnings. It was his own downfall
energeticbombhands
3 ups, 3m,
1 reply
If you feel this way, just flag the meme and/or memechat a community mod, saying this user is begging/ inducing begging for upvotes so they can take it down
JAMESLORDTHE7TH
3 ups, 3m,
2 replies
usually they don't take it down. 9/10 times we need to take care of this disease ourselves
energeticbombhands
3 ups, 3m,
1 reply
I reccomend you get their memechat, these are the following mods I reccomend: