95 views • 3 upvotes • Made by SoaringSky.TF 7 months ago in politicsTOO
your politics bore me 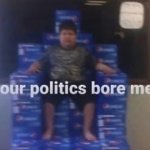 Caption this Meme
Best first
Latest first
Oldest first
7 Comments
TwoWayMirror
3 ups, 7m,
1 reply
I refuse to accept opinions like people of color are inferior, LGBTQ people are evil or insane, the econony is more important than the environment, or poor people deserve it.
SoaringSky.TF
0 ups, 7m,
2 replies
Ok, but you see I'm not going to hate you for having these opinions because these are YOUR opinions. The fact that these are your opinion make it that this is what you believe and people can't change what you believe. People can disagree with your opinion which can be frustrating because people aren't seeing things from your prospective and you want them to see how you think. However, when you start to hate someone because they have different beliefs than you is when it starts to become an issue. And when you dedicate entire streams to contradict what this person's belief is and what that person's belief is, its just going to cause problems and make you hate each other even more.
Lyoll M
3 ups, 7m,
1 reply
How do we change as a society if no one will stand up and say, "No, people of color deserve the same rights and respect as white people, LGBTQ people are people and their love is valid, and we need a healthy earth to survive as a species"?

Especially that last. It's not about hurting people's feelings -- it's about standing up for values that improve people's lives -- and maybe even save their lives.
SoaringSky.TF
0 ups, 7m,
2 replies
Because thats disrespecting the opinion of the person you're contradicting. Even if you see their opinions as invalid, they see their opinions as correct and you have to accept that.
Lyoll M
0 ups, 7m
People's ideas don't form in a relativistic vacuum. If someone's opinion is that only 50 million people voted for Biden (because they've been watching too much My Pillow, perhaps), that's a false idea resting on provable lies. If that opinion leads them to treason and to jail, that's a problem for all of us.

If their opinion is that Trump is much better looking than Biden, that's an opinion on a matter of taste and I'm fine with it, as I am with their opinion that my mask looks stupid. But they don't get to come into my work without a mask and put me, my coworkers and the people we serve at risk based on an opinion.
SoaringSky.TF
0 ups, 7m
Constantly saying that these people are wrong will just make them angrier and you just have to accept that this is their opinion, and this is mine.
Cerebrophage M
1 up, 7m
Holy Strawman arguments batman!
Show More Comments
Flip Settings