The standards couldn't be lower 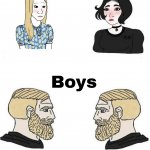 Your desperation is probably what turns people off.
AbigSpookyIdoitWithaActualBrain
0 ups, 12mo,
1 reply
No THIS IS THEIR STANDARDS: (my town has high standards for ugly people) MuSt always work out be 6'4 etc. litterally your normal memed standards
kevdex10
0 ups, 12mo,
1 reply
Ah yes, the town you live in is the reason nobody wants you 🤣🤣🤣

In your mind it has nothing to do with your desperation and inability to take rest for yourself. Consider spending less time online and more in the real world.
AbigSpookyIdoitWithaActualBrain
0 ups, 12mo,
1 reply
consider shutting up and not telling someone who likely spends more time then you outside to spend more
kevdex10
0 ups, 12mo
You did just say you apply meme standards to real life...there is way you spend enough time outside, kid
Show More Comments
Flip Settings

Caption this Meme
Created with the Imgflip Meme Generator
IMAGE DESCRIPTION:
I JUST WANT A GUY WHO SHOWERS AND OCCASIONALLY WEARS SOMETHING BESIDES CARGO SHORTS; GOOD LUCK WITH THAT; YES; WOMEN'S STANDARDS ARE WAY TOO HIGH
hotkeys: D = random, W = upvote, S = downvote, A = back
Feedback