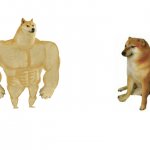 Well of course I didn't respond the way you would've liked, it's not exactly a place where you expect discussions on sexual assault. At least I don't think so. I made a meme that didn't go down well with you ...
Show More Comments
Flip Settings