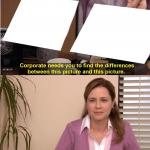 Caption this Meme
Add Meme
Add Image
Post Comment
Best first
Best first
Latest first
Oldest first
7 Comments
reply
YTYeet
1 up, 2m
also, creators, use this picture to get people to understand about #upvote (jk, just made it up), but to remind them to upvote when they see a good meme.
reply
Dude-M
0 ups, 2m,
1 reply
Yeah, the most stupid chit i ever experienced,
were people whose tried to enfoce me to chose the less worse of all bs options.

Even when i suggested to not to vote at all (by all) and lead the bs ad absurdum by enforcing others to think about and offer better options for all of us and not only for a part of the people.

Caption this Meme
Created with the Imgflip Meme Generator
IMAGE DESCRIPTION:
Stupidity; The people who don't vote because they forget to even look at that option; imgflip creators
hotkeys: D = random, W = upvote, S = downvote, A = back
Feedback
<![endif]-->