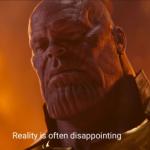 Caption this Meme
Best first
Latest first
Oldest first
7 Comments
NotaKrustyKrabb
0 ups, 8m
Oh well in that case reality is often nearly impossible
SpookyBreadThatLovesAstolfo
0 ups, 8m,
1 reply
Make a move set for waluigi, including ariels, grabs, and final smashes, RIGHT NOW
The_Merchant
0 ups, 8m,
1 reply
Not a Waluigi supporter but sure.
He holds a tennis racket for the entire like his assist trophy and his jabs will revolve around smacking the opponents face.
His F-Smash makes him pull out a baseball bat a take a big swing.
His Down-Smash makes swing a golf club around him in an attempt to hit a ball.
His Up-Smash has him point to the sky and scream "WAH!"
His up-tilt has him wave ribbons as a reference to ribbon dancing in Mario and Sonic
f-tilt will have him swing the tennis racket mentioned earlier.
down-tilt will have him take a swing at the opponents legs with the racket.
his dash attack will have him trip and fall and slide across the ground a short distance.
neutral-special will him serve and hit a tennis ball across the stage.
side-special will be like Wario but it'll be a kart instead.
down-special will be a counter where he strikes back with a karate punch, another reference to Mario and Sonic.
up-special will have him float up with balloons from Mario Party.
grab will have him trap his opponent on a Bowser space from Mario Party.
f-throw will have put on a boxing glove and punch the opponent forward.
down-throw will have him smack his opponent with a baseball bat in rage.
back-throw will have him run behind his opponent and kick them in the back launching them forward.
up-throw will have the Bowser Space spring up and launch the opponent upwards.
n-air will have him strike a pose.
up-air will have him try to swim upwards while his arms deal damage.
f-air will have try to dunk his opponent and can spike like Mario's.
Back-air will have him straighten himself to resemble Luigi's green missile with his back legs do damage.
Down-air will have him fall from the sky with his arms and legs spread out.
Final Smash will be his super move from Mario Strikers.
SpookyBreadThatLovesAstolfo
0 ups, 8m,
1 reply
Hm, not bad
The_Merchant
0 ups, 8m,
1 reply
Why thank you. :)
SpookyBreadThatLovesAstolfo
0 ups, 8m
Np
Demon_Elite
0 ups, 8m
To be honest I never want Waluigi in smash
Show More Comments
Flip Settings