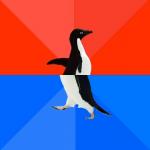 ProgressiveConsrvativeLiberal
1 up, 10m
Since the only fraud was for Trump, shouldn't his supporters be calling for all of the Trump votes be thrown out? Especially in Georgia, where he tried to convince the State Secretary to fudge the votes.

Now to sit back and watch the $#!+ show to see what happens. Trump already planned to flea the country and go to his golf course in Scotland, but Scotland has banned all incoming international flights.

We can only hope that Biden has the cajones to bring justice to Trump once he's in office. Election fraud. Inciting insurrection. Don't even need to go further. Oh well, the New York AG is pleased at his actions, because if he escapes federal justice, he won't escape NY state justice.
[deleted]
0 ups, 10m
Huh?
Show More Comments
Flip Settings