This is for a grade 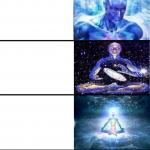 Now, how about:
The universe itself, is God. Every matter in the universe is conscious. God is not a being that talks and feels. He is the Laws of Physics and existence itself, as certainly in the future as in the present and past.
reply
TellMeWhyIExist
1 up, 2w
Er, then how did he speak to Abraham? Moses?