The scroll of no lies share
1,782 views • 47 upvotes • Made by anonymous 3 weeks ago
memesthe scroll of truth 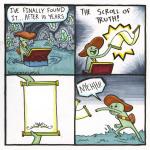 Caption this Meme
Add Meme
Add Image
Post Comment
Best first
Best first
Latest first
Oldest first
8 Comments
reply
DummyThiccs
0 ups, 3w,
1 reply
vaccines have been around since the late 18th century are you sure that people don't know
reply
MossCat451
0 ups, 2w,
1 reply
I'm gonna have to side with the OP here, when most of the vaccines we have today were created they were never tested for long term side effects. To this day there still has yet to be any sort of comprehensive test on the effects it has on DNA or the immune system of a person post-vaccination. Given that nowadays the animal matter of all sorts, formaldehyde, and in some vaccines aluminium or traces of mercury are given to most babies following birth without much question or hesitation; there's very little way of knowing the effects it actually will have on that particular child versus all his peers growing up.
reply
DummyThiccs
0 ups, 2w,
1 reply
you have probably eaten more formaldehyde, mercury and aluminum through small amounts in food in the last month than you will take through vaccines throughout your entire life.
reply
MossCat451
0 ups, 2w,
1 reply
That could be true. But neither of us would known. There's more than a dozen strains of formaldehyde, and more than half of them are banned for use in commercial food production in most countries. Given that and that we don't know the dilution rate it's being administered at (because that also makes a very major difference), and since none of that information is really available for public viewing or generally spoken about, we never really would have any way of proving that theory.

But I'm not here to argue about vaccines. All I was saying was that I agreed with the OP's premise. When the vaccines were made, they were treatments for those already suffering the condition in an effort to lessen symptoms and pain, not as preventive medicine. These days that's how we use them, but these vaccines were not tested for continued generational use or how it would affect our immune system over time. All they tested for was 'did the condition improve?' and/or 'did it kill him?'. Nothing else. Their knowledge and their tools back then were rudimentary at best compared to doctors and scientists now, yet we still rely on their findings without question or updated testing. Meanwhile when they approved most of the formulations, heroin was still being given in cough syrup and as a pain medication for children who worked in the mines. With that in mind, I don't think it's too much to ask for a more all encompassing reassessment of formulation in immunizations rather than simply lessening the amount of toxic materials when the like was done while mercury was still a prominent ingredient. We have the technology and manpower, it does not feel unfair to me to ask that said resources be used for the sake of public health and improving quality of life.
reply
DummyThiccs
0 ups, 2w,
1 reply
"I'm not here to argue about vaccines"*proceeds to say something unresearched and scientifically inaccurate about vaccines*

When vaccines were first made they were absolutely used as preventive medicine. It was developed to prevent smallpox by injecting one with the far less deadly and more easily cured cowpox which helped build immunity. Also your comment on formaldehyde in commercial food. You clearly misunderstood my point, there is a median rate of almost 150 mg/kg in fish naturally. Your comment about dilution rates in vaccines is irrelevant because vaccine doses are already small and the traces of formaldehyde are even smaller. Testing vaccines is more than asking two questions. Subjects of vaccine tests are observed for symptoms and reactions and as many variables as possible are tested. I agree that medical tools in the 1700's were rudimentary but the smallpox vaccine worked and it did eradicate smallpox until the modern smallpox vaccine came out in the next century. I kinda see what your saying about heroin being used in cough drops and on children but I don't understand how that connects to early vaccines. The early smallpox vaccine did work. It might be too much to ask that certain materials are removed from vaccines because they are probably key ingredients. Also the fact that you want less "toxic materials" in vaccines means you missed my point. Those materials do not affect you negatively in vaccines because they are only toxic in larger doses and you already consume those materials in larger amounts in almost every food you eat.
reply
MossCat451
0 ups, 2w,
1 reply
I can't say my research has shown that on smallpox, but other diseases like the bubonic plague, German measles, influenza, and chickenpox for example are a handful of ailments vaccines weren't made to prevent, but rather treat. Hell, when the chickenpox vaccine was created, it was only meant to be used as a treatment; administration of that particular vaccine was most effective if taken within three days of being infected with chickenpox... it doesn't sound like a whole lot, but it gets darker when I told this finding to my own mother only to learn that when they were 17 they nearly died from chickenpox that they caught from their little sisters who got it at school. The doctors didn't understand what was going on because my mother had ALL their immunizations up to date, yet here they were sick as a dog. I've never caught chickenpox myself, and frankly, at my age death from it is almost a certainty. So outside of paranoia or my preservation of life instincts (two things humans are normally motivated by psychologically), my immunization is my last line of defense. Unfortunately, stories like that don't instill me with even the slightest bit of confidence that my immunization will actually work when I'll need it most.

Maybe it was the vaccines themselves, or maybe it was because the people being given them were all told this new serum would cure them; causing some sort of placebo effect. There were no control groups, and everyone was given the exact same thing at the same time, so there's no way of knowing which ingredient really did the trick, or if any of their ingredients worked. Frankly I don't even understand the relevance of 'chick embryo fibroblasts' or 'monkey kidney cells', or how having them injected into someone could help. Or why cell culture media (essentially steroids. But, growth hormones to be more succinct) are approved in vaccines given to newborns. Yes, most of these chemicals are seen in a large quantity of on the market too. But....
1. You're not injecting your food directly into your veins, there's a whole digestion process that often filters out indigestible substances.
2. The fact that there is such nonchalance to these things being in food or medicine gives me concern.
reply
MossCat451
0 ups, 2w,
1 reply
The relevance of the heroin mention was not because of any relation other than the time period. The 1700s were a time when middle class families bathed once a week at most and every member shared the same bath water, when mattress manufacturers stuffed their product with literal garbage, and at that point no one could really digest milk without developing violent sickness. It's actually no wonder people got as sick as they did so easily in that age. We didn't believe in the hygiene practices we do today, no one brushed their teeth or even washed their hands regularly; not even doctors. It wasn't mandatory or a big deal to them. Bacteria studies were still in their most infantile stages of development then. That's why I think we really shouldn't be taking medical advice haphazardly from the same people who would burn a woman and call her a witch without getting her side of the story because she happened to move in next door to a farmer whose cow was going to die the next day for still unknown reasons (likely disease); if she died in the fire, she was innocent. That was their idea of a fair trial.. We don't sell our daughter's hand in marriage for two goats anymore, and we don't shame a woman for being sexually assaulted and accuse her of being gender confused like Sigmund Freud. So, we don't take nutritional, psychological, hygienic, scientific, law, or occupational advice from the 1700s; yet our medical practices are still largely influenced by them. So please, do forgive me if I think it's a bit silly to cast off all their other ridiculously outdated procedures or ideas, but continue to follow their instructions on how to treat illnesses.
reply
DummyThiccs
0 ups, 2w
As a society we started bathing and brushing our teeth regularly because not doing so directly contributes to ailments. We stopped burning women because we, as a society, learned that women are people too. The way society progresses is that we keep the good stuff from the past that worked but we improve on it, and we scrap the bad stuff from the past that is bad for humanity. Like for example we kept vaccines because they scientifically helped people but we improved on vaccine technology. On the other hand we got rid slavery because it was bad for humanity. Also your comment about plague vaccine is not true. A plague vaccine did not come out until 500 years after the main epidemic to ensure that there wouldn't be a delayed second wave. There was no plague vaccine in the 1300s. The first true vaccine was for smallpox. Also vaccines by definition are preventive medicine not treatment.
Show More Comments
Flip Settings
memes
gifs
other