So anyway I started blasting 73,151 views • 1465 upvotes • Made by ItsTimeForSomeChaos 10 months ago
so anyway i started blasting 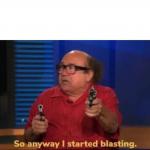 Caption this Meme
Best first
Latest first
Oldest first
141 Comments
[deleted]
16 ups, 10m,
6 replies
Ooh...big whoop! You can get points by downvoting too. And between Stonks, Anime, obscure video game references and kindergarten-level spelling and grammar, 80% of the memes DESERVE TO BE DOWNVOTED!
TheLargePig
9 ups, 10m,
4 replies
Don’t forget begging memes (like this one)
[deleted]
7 ups, 10m
Thank you, B.P. - I DID forget those!
WoofWoof2
8 ups, 10m,
1 reply
How is this begging?
NoBegging.Period.
7 ups, 10m,
2 replies When your meme’s premise is “if you upvote this meme, you will get 1 imgflip point,” that’s when it becomes obvious you’re upvote begging. You’re saying “upvote this meme! you’ll get something much smaller in return!”
WoofWoof2
6 ups, 10m,
1 reply
But he's not talking about his meme
NoBegging.Period.
7 ups, 10m,
2 replies
Yeah... so?
WoofWoof2
6 ups, 10m,
2 replies
He's saying he's upvotes all the memes he sees to get points, that's not begging.
NoBegging.Period.
6 ups, 10m,
3 replies
And what does he do? He makes a meme about it of course. So he can get MORE points. If the dude was honest he’d admit he made it for the meme and not actually to upvote every meme he saw.

And I HOPE he doesn’t upvote every single meme he sees. Because
1. it becomes obvious he’s only upvoting people to help himself. If he didn’t benefit from upvoting he wouldn’t have done it at all.
2. there are a lot of awful memes on this site that frankly should NOT be upvoted.
Whotookmyusername
4 ups, 10m,
3 replies
But upvoting others memes also helps them.
NoBegging.Period.
6 ups, 10m,
1 reply
The amount of work you put into something doesn’t make it good. Someone could have worked for an hour on a meme and it could still be trash.
Whotookmyusername
4 ups, 10m
Oooh.... Like how J.K.R. worked on the cursed child!
NoBegging.Period.
6 ups, 10m,
1 reply
When you’re obnoxious about it like, “I’m upvoting every single meme I see because it gives me points,” the fact that you’re “helping” them means nothing. Upvoting is no longer about “I liked your meme. Take my upvote.” It is now about “I didn’t even read your meme. I’m just going to upvote it because I get points if I do that.”

It really makes the OP look like a selfish little prick when you think about it.

Repeating what I already said:
“And I HOPE he doesn’t upvote every single meme he sees. Because
1. it becomes obvious he’s only upvoting people to help himself. If he didn’t benefit from upvoting he wouldn’t have done it at all.
2. there are a lot of awful memes on this site that frankly should NOT be upvoted.”
Whotookmyusername
3 ups, 10m
But I read all the memes I see and upvote them because they also worked hard on the meme.
NoBegging.Period.
4 ups, 10m
Exactly.
not_a_communist_spy
3 ups, 10m,
12 replies
man..you just think about eVERYTHING ASS IF it's BEGGING. he's not saying you should upvote hismeme is he? no. so just leave the meme tf alone
NoBegging.Period.
4 ups, 10m
“Upvote begging is anything to do with asking for upvotes.”
That’s not an opinion. That’s a claim. Even if I didn’t say it. An opinion would be something like “I don’t like upvote begging.”

If you can back up your claims well, which I have over and over again, then it is put in proposition for fact-hood.
NoBegging.Period.
4 ups, 10m,
1 reply
Problem is, that’s a “you” problem.
Any fact I give you’re just going to dismiss as a toxic opinion. Obviously you’ve tricked the whole conversation to make it where you win every time no matter how truthful my evidence is. Great going.

You have given no examples of my facts being just “opinions.” Because you have no mental capacity to explain anything.
not_a_communist_spy
3 ups, 10m
well, no i havent. i simply stated you haven't given me a REAL fact.

well, here's one of your damned opinions : "upvote begging is anything to do with asking for upvotes" thats not true. this very meme. ISNT ASKING FOR UPVOTES. in a way (I'm about to misuse a word probably) your a hypocrite.
NoBegging.Period.
4 ups, 10m,
1 reply
I’ve given several.
not_a_communist_spy
3 ups, 10m
no. im afraid you havent. your facts have been opinions. you may not think of it like that. but its true.
NoBegging.Period.
4 ups, 10m,
1 reply
It’s called manipulation. A word you might have heard before. He’s manipulating you. And he’s winning. You should be winning.

And I haven’t called out memes for upvote begging in a whole month. Stop doubling down on the statement “you just think everything is begging.”
not_a_communist_spy
3 ups, 10m
1. nah its not your just thinking of the BAD in memes before you think about the MEME itself.

also i have no clue why i said that
NoBegging.Period.
4 ups, 10m,
1 reply
The bad IS the meme.
not_a_communist_spy
3 ups, 10m
the meme isnt bad. its the people who think its bad and spread that thought to others. this is opinion. and i only accept facts here.
NoBegging.Period.
4 ups, 10m,
1 reply
“well, here's one of your damned opinions : "upvote begging is anything to do with asking for upvotes" thats not true. this very meme. ISNT ASKING FOR UPVOTES. in a way (I'm about to misuse a word probably) your a hypocrite.”

I didn’t say that. In fact I have said many times that upvote begging is much more than merely asking for upvotes. If it was just about asking for upvotes, why would I call this meme out? You pulled a quote out of candy land just to pretend to prove me wrong.
not_a_communist_spy
3 ups, 10m
no. i pulled a quote from when you first started your so called "upvote beggar police" wich have no right to "police" begging (might i add) maybe you don't remember it. but i sure as hell do. and might i also add: begging is begging. get your head outof yer ass and look. your an idiot.maybe you just wanna widen your range of memes to harrass. i don't give a shit. stop this philosophical BULLSHIT. your not doing SHHHHIITTT!
NoBegging.Period.
4 ups, 10m
Except I’ve given several reasons as to why it’s bad.
And your replies are: “but it’s not bad.”
NoBegging.Period.
4 ups, 10m,
1 reply
You can’t say something is fact if you only repeat what you say. You have to back it up.
not_a_communist_spy
3 ups, 10m
i didnt say anything was factual. i said i only accept facts. and i cant and wont give what you call a valid fact, until YOU give a valid fact.
NoBegging.Period.
3 ups, 10m,
1 reply
You might have noticed I took a while to reply. Why is that? Because I actually took time to look for that quote. And guess what. I. NEVER. SAID. THAT.

Everything I said revolves around the fact that begging is more than asking for upvotes.

Now stop inventing fake arguments. Stop pretending to do research. Stop making up quotes. And actually use your brain. I know you're better than this.

“Philosophical”
Didn’t someone already address this with you? There is no philosophy involved.

“You’re not doing S***!”
Actually I’m doing a lot more on this meme website than you ever will. I have more influence, more publicity, and exponentially more credibility than you do. My UBP stream is getting more and more followers. I am expanding awareness about upvote begging and why it is bad.
not_a_communist_spy
1 up, 10m
your right. after reading this i remembered: someone else said that, my bad.

i know that. yet, i still cant find where that makes it begging.

i create "fake" arguments as a delay I'm never sure if they 100% accurate but its what i think.and your "upvote begging is bad thing. is what YOU think. I'm not pretending to do research. because i don't do any. never said i have either. that, was a false memory. I've been using my brain. maybe you haven't noticed because yours head is up your arse. HA! I'm no near better then this then i am in real life, in real life. I'm 2 maybe 3 times worse.

i resort to lbeling it as philosophy because its my way of saying that's your opinion.

yes you are. but its an opinionated thing you're doing. what I'm doing is trying to make imgflip a shameless place. what you're doing is shaming. i don't like that. i don't give a shit about your influence, or publicity, or any of your credibility. i want IMGflip to be a place without shame, a place where people can be themselves and do what they want without shame, i know this dream is impossible due to political differences, and racial issues. but i would like to start with upvote beggars. they have a right to make memes without being shamed. (the downvote button exists for a reason) yeah, your spreading word of upvote begging, and YOUR and (others i will add) opinion.
ItsTimeForSomeChaos
2 ups, 10m,
1 reply
i mean his name is NoBegging.Period. it makes sense.
NoBegging.Period.
4 ups, 10m
Yeah. That means I call out beggars. You are one of 2 I’ve called out.
NoBegging.Period.
1 up, 10m,
1 reply
They have the right to make memes.
They don’t have the right to lazily beg.
not_a_communist_spy
1 up, 10m
actually. they DO if they HAVE A RIGHT to make memes then they have a right to be lazy about it.
NoBegging.Period.
1 up, 10m,
1 reply
Alright. Ye got me there.

I will still criticize them for it. Discouragement. Remember?
not_a_communist_spy
1 up, 10m
i cant think of an argument to that
WoofWoof2
3 ups, 10m,
1 reply
All I'm saying is he's not begging okay. Besides I thought it was funny.
NoBegging.Period.
4 ups, 10m,
3 replies
not_a_communist_spy
3 ups, 10m
how does that make somene begging? it doesnt. your being a philisohpical bullshitter.
WoofWoof2
3 ups, 10m
Look I don't want to argue.
cheesedood-official
0 ups, 3m
ITS NOT A F**KING BEG, HES LITERALLY SAYING THAT IF YOU UPVOTE MEMES YOU GET POINTS AND HES JUST SAYING THAT HE UPVOETS EVERY OTHER MEME BUT HE DOESNT FORCE PEOPLE TO UPVOTE HIS IDIOT,
Upvote begging:
Forcing someone to upvote
"heY yOU KNoWw ThAat yoU GeET PoINtS AfTeR You uPVoTe??? ThEn uPvOtE ThiS!11!!!!!!111111!!"

This meme:
Saying that you get points if you beg
Not forcing the person to upvote
Simply saying he upvotes others because he gets points

Caption this Meme
Created with the Imgflip Meme Generator
EXTRA IMAGES ADDED: 2
IMAGE DESCRIPTION:
ME WHEN I REALIZE I CAN GET POINTS BY UPVOTING MEMES; UPVOTING
hotkeys: D = random, W = upvote, S = downvote, A = back
Feedback
<![endif]-->