Too stupid to see the hypocrisy 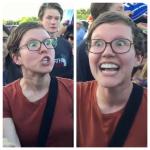 Caption this Meme
Best first
Latest first
Oldest first
1 Comment
Dude-M
0 ups, 2y
https://informationisbeautiful.net/visualizations/rhetological-fallacies/
Appeal to authority, low self-esteem, big mouth, overcompensating,
everything has to run after her commandment, not questioning if it is true/good/right or not ...
The rules of the discourse after Socrates demand:
if something is agreed/known as bullshit/ not helpful/ false, it is to ban from the discussion.
For ethical reasons, some heroes allowed this again later, by claiming it were ok to express dumb things. otoh we have to admit, if it is evaluated falsely and accepted is a different thing.
I am sure you know already about that phenomenon: every morning at least one dumbass awakens.

Did you ever see successful people running on the streets, while holding up signs and try to command/demand how others have to behave?
Only in rare cases, eh?
Show More Comments
Flip Settings

Caption this Meme
Created with the Imgflip Meme Generator
IMAGE DESCRIPTION:
TRYING TO SHUT DOWN HATE SPEECH? SURPRISE! YOU'RE THE ONE USHERING IN FACISM
hotkeys: D = random, W = upvote, S = downvote, A = back
Feedback