No really, this is how I view anime share
2,811 views • 62 upvotes • Made by anonymous 10 months ago
animejapanworld peacechange my mind 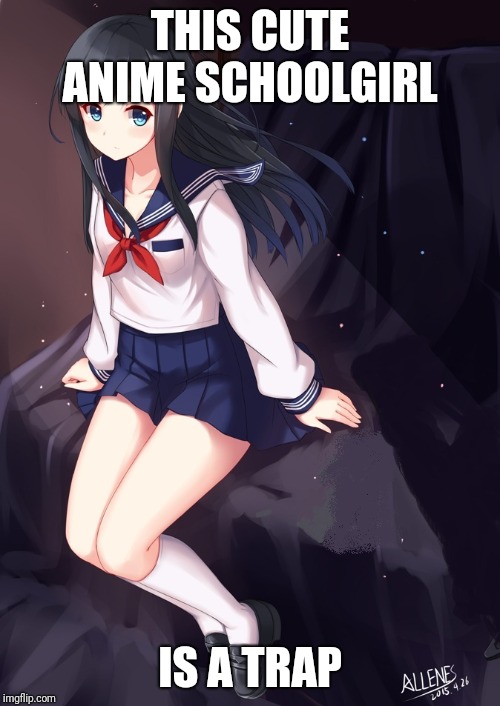 I'm guessing your preferred choice of anime is slice of life or simple comedies right?
reply
[deleted]
0 ups, 10m,
1 reply
I mostly prefer anime with a really good plot but yes, I also like simple comedies
reply
Gryphonstar5678
1 up, 10m,
1 reply
I too enjoy a good plot, from the mecha Code Geass to the dark yet heartwarming likes of Full Metal Alchemist Brotherhood and even the seriously underrated and short lived Arslan. Though I also adore gory short pieces like Hellsing(The image my previous comment) and the often misunderstood dark and soft romance of Ancient Magus Bride.

Those are just a few good choices I enjoy. What your preferred animes with good plots?
reply
[deleted]
0 ups, 10m,
1 reply
I would try and watch the anime you just mentioned, but I only watch anime that isn't too mature or too graphic (Eyes being popped out, necks being cut and so on), I have finished watching Angel Beats and I got to admit, it was good, despite the plot holes. I have only just recently started watching Death Note and so far, it's really good. In future, I might start watching Blue Exorcist, but until then, I'm going to focus on Death Note.
reply
Gryphonstar5678
1 up, 10m,
1 reply
Been a while since I sat down to watch Angel Beat. That anime was good. The first half of Death Note is very good, but it second half is very much a mixed bag of extremely good idea and meh ideas, just trust me when you get to the second and you will know it's the second half keep watching even through the slower episodes because some of it's best episodes are hidden among the second half's mess.

Blue Exorcist is really good too. I could easily put it alongside the others on my previous list. However, there wouldn't be an easy way to describe it in just two words. I will warn you there is a "Sequel" to it that feels very odd in it's starts since it relies so heavily on the manga. Basically the first series ends on an anime-only ending, but that not bad at all. It's ending is by far one of the best anime ending out there, so much so that it actually inspired the writer to make the ending of the manga extremely similar to the original anime ending. This, unfortunately, leave the "Sequel series in a bit of a strange spot on whether it should be watched because it only covered a single arc and just stops. Simply put, watching Blue Exorcist first series and enjoy the goodness of it, but only watch its sequel if you feel you need more, yes it creates plot holes for itself by existing, but it's still more of the anime.
reply
[deleted]
1 up, 9m,
1 reply
Watched a couple of episodes of Death Note. So far, it has a interesting plot to it.
But yeah, I'll keep your advice on the second half for when I reach it
reply
Gryphonstar5678
0 ups, 9m,
1 reply
I guess the biggest reason the second half fails so hard is because it tries so hard to out do the first half and only succeed some of the time. Personal best moments in the second half for me without being spoilery are proper introduction to Mello because perfectly his personality clashes against every other antagonist in the series and of course the TV slaughter scene, note it's not a very dark scene at all, but once you have seen it, you'll understand there no other way to describe it. There a a few others, but damn those two scene were just so damn good and totally worth digging through the mess..
reply
[deleted]
0 ups, 9m
Ok, thanks for that
reply
Twinfool29999
1 up, 9m,
1 reply
If u haven't seen erased or a silent voice, those have some really good plots. I recommend those 2 for sure
reply
[deleted]
0 ups, 9m
I've seen A Silent Voice, and believe me, it was good. However, despite being really good, it wasn't really my type of anime. I'm more into slice of life or anime with dark plots.

I haven't seen Erased, but then again, I might watch it at some point if I'm able to get my lazy mind to convince me to watch it.

Caption this Meme
Created with the Imgflip Meme Generator
IMAGE DESCRIPTION:
The Japanese invented anime as a peace offering to the world
hotkeys: D = random, W = upvote, S = downvote, A = back
Feedback
<![endif]-->