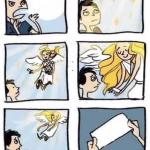 Caption this Meme
Add Meme
Add Image
Post Comment
Best first
Best first
Latest first
Oldest first
5 Comments
reply
Notbad
1 up, 6m,
1 reply
There is literally tons of evidence.
reply
UniformVictor
0 ups, 6m,
1 reply
I'm not sure how much evidence there are but certainly there are a lot of them. Sadly, the majority of it sadly cannot be seen by fallen man.

Creation is the easiest show of evidence but some see nature as something that simply cannot come by chance while others just see vegentation ("Eh, so what if nature is complex, that doesn't mean God created it").
reply
Notbad
1 up, 6m,
1 reply
The evidence is in such high abundance that the Bible says that those who reject God's existence are "fools" (Psalm 14:1 and 53:1) and "without excuse" (Romans 1:20).
reply
UniformVictor
0 ups, 6m
I agree, there's definitely enough evidence, but for me the question is how willfully blind are they?

I've heard of testimonies from former atheists and there's this one thing they have in common: they wondered if God exists? The scripture is clear that the evidence for Him can be clearly seen, even the godhead (KJV) so that they're without excuse. But waht of their testimonies?

So, based on Romans 8:7, 1 Corinthians 2:14 and 2 Thessalonians 2:10-13, I believed that the reason why they don't see the evidence is because of what's called Cognitive Dissonance

Cognitive Dissonance theoroy is a Psychological filtreing to where it screens things the person cannot internally bear:

"Festinger's (1957) cognitive dissonance theory suggests that we have an inner drive to hold all our attitudes and behavior in harmony and avoid disharmony (or dissonance). This is known as the principle of cognitive consistency."

We as human beings are so sinful (rebellious) in nature that our minds filter clear evidence of God so that we do not see Him in creation, nor do we allow our conscience goad us to investigate. And though some would want to see if God exists, the innate sinful self, if not drawn by God (John 6:46), would the person soon incline him/herself to more palatable versions of God they can stand. What makes sense to them.

But those who truly want to see if God exists, and cares not what his/her search yields, then they'll come to God regardless of their own sensibilities.

Source:
Saul McLeod "Cognitive Dissonance" SimplyPsychology updated Feb 05, 2018 https://www.simplypsychology.org/cognitive-dissonance.html
reply
UniformVictor
0 ups, 12m
BALANCE SCALE:
God had given us enough for us to believe with a surety that He exist.

Such argumentation, evidence, or reason (i.e. 5 Arguments for God*, 2nd Law of Thermodynamics, Rossetta Stone, the discovery of ancient city of Jericho, etc), are so compelling that with one could only conclude that God exists [Assuming that we do not have an innate* sense of God's existence (Romans 1:18-32)].

Yet, there isn't enough of such evidence, particularly physical evidence, to truly or fully "Convince" skeptics of His existence. Why? I believe He had done so for our condemnation Here's what I mean:

Imagine a scale with one that is to believe, and the other to disbelieve. What would tip the scale is not ultimately the volume of, or the potency of evidence, but our will.

Will we believe based on the evidence given, or disbelieve because we love our life of sin more than we value truth? Sadly it is often the latter which is why only the few will be saved.

I believe the reason for that is Congnitive Dissonance. It is a mental filtering* of what we can psychologically bear, and what we cannot. The Bible also says that Satan, the "god of this world" blinded the minds of men so they would not believe His Gospel (2 Corinthians 4:3-4).

So for some of us we look at creation with awe and cannot but conclude that there must be a god, and others just see creation as rocks, plants, trees, animals and sky, but nothing more. They can be filled with wonder like anyone but never see the ontological implication.

Caption this Meme
Created with the Imgflip Meme Generator
IMAGE DESCRIPTION:
WHY ISN'T THERE ENOUGH EVIDENCE OF GOD TO MAKE* ME BELIEVE?! YOU WOULD NEVER HAVE BELIEVED; EVEN IF YOU WERE BURIED IN IT.
hotkeys: D = random, W = upvote, S = downvote, A = back
Feedback
<![endif]-->