Remember When You Didn't Have To Take Out A Loan To Go To A Concert? $100 Ticket To See Pink Floyd ... Sixth Row Center. 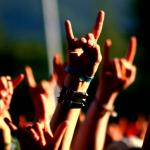 Largest let down? Had tickets to Rush and the day of the concert my ride cancelled. I had had my license for three days and no way were my parents allowing me to drive to Hartford (sold the tickets at UMass, so at least I got my money back)

Tidbit: Turned down Pink Floyd at Foxboro as I really couldn't afford it at the time, so instead I stayed home and stepped on a piece of glass that bled all over my apartment.
reply
LadyDeerHeart
1 up, 6m,
1 reply
I think I might have gone with door number one instead of bloody carpet. Lol. At least you can laugh about it now. Rush would have been hard to miss.

I LOVE your accent! Lol. Lived near Boston for a year...it snowed once and that same snow stayed for six months. O m g cold! Loved the people, nature and history there but it was just too cold.
reply
Boma
0 ups, 6m,
1 reply I live in the western part of the state, we don't talk like that :)
reply
LadyDeerHeart
1 up, 6m
That's good too!
Show More Comments
Flip Settings