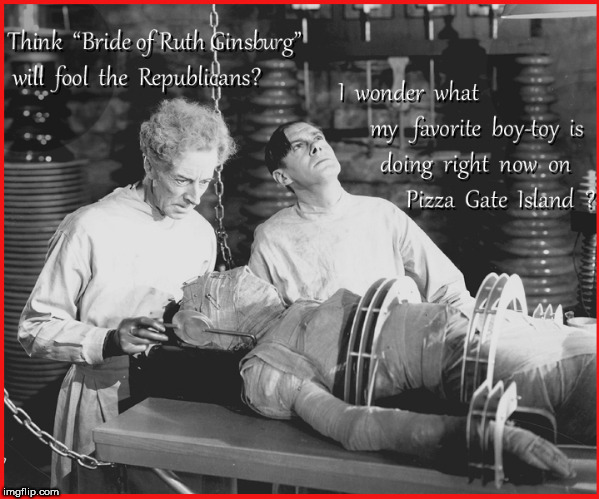 who slapped him on the wrist idiot ?
As usual....you are wrong ....it is the Democrats who did all of this and everything you say is a lie.
reply
CanaryInTheTemple
0 ups, 1y
Sorry,you should download Jeffrey Epsteins little black book-you'd see several Trump numbers in it! As well as powerful men from BOTH parties.
Jeffrey Epstein had over 50 women come forward & testify that he molested them when they were children,grooming and training them as child prostitutes.
In a number of those depositions, Donald Trump was prominently mentioned.
Katie Johnson was **ped 4 times by Trump & Epstein.
Another 14 year old girl,a runaway who was a Mar-A-Largo employee, was recruited by Epstein;she too was molested, trained,& pimped out by Trump's buddy,who used the young girls to recruit other children.
Both girls were repeatedly told by Trump & Epstein that "their entire families would be killed if they ever spoke" of their ordeals.
One girl witnessed Trump assaulting a 12 year old girl,known only as "Maria",who cried & begged him,to stop.
Maria later mysteriously disappeared and her disappearance was used to keep other terrified girls in line.
Epstein received only 13 months jail time;the amount of victims he had and the charges should have put him away for life!
Epsteins victims are suing over his sweetheart deal.
And no,it is NOT just Democrats "who were involved with Jeffrey Epstein!
The PizzaGate thing has been disproven.
But the Trump/Epstein story IS real & there are court depositions & multiple lawsuits from victims to prove it.
Trump described Epstein as "A great guy who loves beautiful women as much as i do!"

Epsteins little black book was sold by a staff member who is,unlike Epstein, still in jail for his misdeed -stealing a book that contained an explosive list of powerful men.
The list can be downloaded if you have the courage to look.But you won't.
Most major US broadcast networks won't carry the story-they have advertising revenues to consider. To get it you have to read long boring articles by newspapers. I have no reason to lie.
reply
CanaryInTheTemple
0 ups, 1y
Again with the confusion! Give it a rest unless you want me to start talking about things that are NOT lies-like Trumps crimes with his good buddy Jeffrey Epstein,who Trump described as "a great guy who loves beautiful women as much as I do!"
Except that they weren't women,but underaged girls,including one who worked at Mar-a-Largo, who was recruited to be a child prostitute for Trumps good buddy Jeff. The Trump family numbers occur several times in Jeffrey Epstein little black book.
Show More Comments
Flip Settings
Created with the Imgflip Meme Generator
hotkeys: D = random, W = upvote, S = downvote, A = back
Feedback
<![endif]-->