Fastest Way To the Front Page 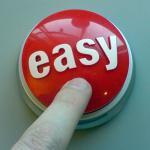 However, someone has to CREATE memes. At least sometimes, for others to repost them. So they can BE memes.

The man who invented the word 'meme' (Richard Dawkins) has mandated the passing of memes from one individual to another. And another...

All these memes are yours. Use them together. Use them in peace.
reply
Damon_Knife
2 ups, 2y
Pretty much.
reply
[deleted]
2 ups, 2y,
1 reply It was AndrewFinlayson who shared this gem a few days ago.

I like it. This knowledge is liberating.... sets us free from the bonds of jealousy and the notion of... possession.

Btw, the graphic and my first comment are deliberately out of sync. This was to reflect the polarization and duality on both sides of the 'debate'. In this case... everybody wins.

Let's get out there and mix it up! :-)
Show More Comments
Flip Settings
memes
gifs
other