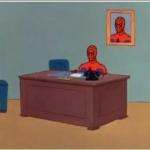 I appreciate that, but it should be just a common courtesy of the site like upvoting someone you're replying positively to.

If I was able to pick a week theme it would be Star wars expanded universe novel cover art. Thanks Johnny Cash, I appreciate that.

I have okay rep right now though. I didn't yesterday, but I do today.

This is just about the troll getting away with it and being enabled by users who are apparently okay with his trolling and alt account using. :{D
reply
[deleted]
1 up, 4y,
1 reply
Nope, I commented before it was featured. It's a trick that TammyFaye and Ghostofchurch told me about.
reply
tetsuoswrath
1 up, 4y
How? How would you even know I had a submitted meme? Show me this trick.

Cause I don't believe that's possible for anyone other than a mod. :{O
Show More Comments
Flip Settings
memes
gifs
other