We need a single word that sums up Obama's presidency... Oh, I know! Share this a lot!!! share
5,886 views • 8 upvotes • Made by MamaTriedRob 5 years ago
bathroom stallfunnymemesobamatransgenderpottygate 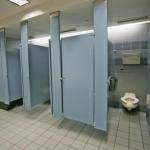 Caption this Meme
Add Meme
Add Image
Post Comment
Best first
Best first
Latest first
Oldest first
10 Comments
reply
MamaTriedRob
2 ups, 5y
Oops. Should've Googled this first... But I was so excited about having come up with this word that I rushed to create this... Darn it.
reply
KenJ
0 ups, 5y,
1 reply reply
MamaTriedRob
0 ups, 5y,
1 reply
I get your point, but you're misdirecting guys' concern. I don't give a f**k how big their wiener is, just don't let it anywhere near the women's room. See my meme at imgflip.com/i/138wxl where there is someone who is making an actual (if incorrect) point instead of silly attempted insults.
reply
KenJ
0 ups, 5y,
1 reply
I just think people are raising a big stink about a subject that in a hundred years time they'll be laughed at about. Like stodgy old establishment men in the early 20th century worried that giving women the vote will hurt their sensitive natures. Women will always be at danger from perverts and fools, but in the end free choice should win out. It's not just the nature of the people of the U.S. to want more freedoms but the nature of humanity in general. Of course the solution here is simply to build single-seater bathrooms, but both sides of the argument here, both right and left, don't want the easy solution as raising a stink about it motivates their followers.
reply
MamaTriedRob
0 ups, 5y,
1 reply
Hey, I'm a libertarian--REAL big on personal freedoms. I support gay marriage. I'll use whatever gender pronoun a person wants me to. But there are women and parents of girls who do not want people with p**ises in the women's room. I dare say, without having seen any actual statistics on it, that there are likely many more that meet that description than there are pre-op transgenders who want to use the women's room. We're a country of majority rules. There's going to be one side of this that is unhappy about it no matter which way you go. The needs of the many outweigh the needs of the few.

If you haven't done so, please check out the meme linked in my previous reply and the comments for it. It is my hope that you understand, I'm not trying to be an asshole. I have legitimate concerns for the safety of women and girls.
reply
KenJ
1 up, 5y
I looked in on the meme comments. I understand your position here. My first impulse would be to question allowing all-and-sundry into whatever loo they wish to use. But things ARE going to change whether a self-professed majority want them to or not (I'm not including you here). My position is that people should be prepping themselves to get used to it instead of fighting a hopeless battle. At one time people automatically associated homosexuality with pedophilia and beastiality. Nowadays the (dare I say vast) majority knows that's bullhooey. Yeah, my two meme responses above were lame pseudo-fratboy attempts to make fun, but the point I was trying to make was that people are overreacting. Some people are honest in their concerns and make legitimate points, but most of those arguing both sides are mostly interested in 'winning'; beating down the 'other' to gain votes. The arguments of the activist left aren't as obvious as they imagine them to be; the angry right seems to present the issue in a sexualized context to make people fearful. I understand where you're coming from - generally I think we're coming from similar points-of-view - I just think I differ because, regardless of the legitimate concerns of the current majority, I just think what should be done is education rather than battling back.
reply
TodaysReality
1 up, 5y
Show More Comments
Flip Settings
memes
gifs
other