Trump Most Interesting Man In The World 16,150 views • 8 upvotes • Made by anonymous 7 years ago
trump most interesting man in the world 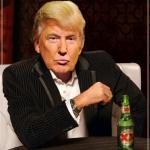 [deleted]
0 ups, 7y,
1 reply
Never happen buddy...not here. But I appreciate your support!
Invicta103
1 up, 7y,
1 reply
If trump runs independent. . I think hillary wins. Trump will split the vote.
[deleted]
0 ups, 7y
Maybe that too. Either way...if he's in the general election in any capacity the Democrats win. Seems to be a pattern. The Democrats dont win as much as the Republicans kill themselves. The GOP is so splintered they're aren't enough votes to carry any one candidate. Hard line conservatives won't vote at all before voting for a moderate republican. And vice versa. Throw trump into the mix and it's a lock that the Democrats win. Bernie supporters (most anyway) would still vote for Hillary. Those that wouldn't may vote for a moderate republican like Kasich or even Jeb. If Cruz or Rubio are up there they may write in bernie!

I made a bet with a buddy of mine (a very conservative atheist libertarian, by the way) last go round about this time in the process that Obama would win again. He simply couldn't believe it. He thought it was sure thing. We bet on a bottle of glenfiddich 18. Man that stuff is smooth. Hahaha
PraytheReyAway
0 ups, 7y
That's for damn sure.
[deleted]
0 ups, 7y Caption this Meme
Created with the Imgflip Meme Generator
IMAGE DESCRIPTION:
I DON'T ALWAYS WIN THE REPUBLICAN PRIMARY BUT WHEN I DO A DEMOCRAT WILL WIN THE GENERAL ELECTION
hotkeys: D = random, W = upvote, S = downvote, A = back
Feedback