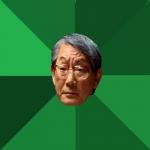 Caption this Meme
Created with the Imgflip Meme Generator
IMAGE DESCRIPTION:
ME AND MY WIFE HAVE A DUMB CHILD WE NAMED HIM SUM-TING-WONG
hotkeys: D = random, W = upvote, S = downvote, A = back
Feedback