this will never happen cause sega is in china or japan 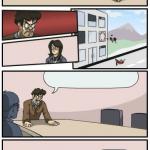 Caption this Meme
Created with the Imgflip Meme Generator
IMAGE DESCRIPTION:
WHAT SHOULD WE REPORT TO SEGA TO CHANGE SONIC PRIME? SONIC VS ROBOTS! NEXT! SONIC VS SONIC! NEXT!! NOTHING; WHAT,ITS NOT AS DUMB AS THEIRS; NEXT!!! SONIC VS PRIME MAXIMUS; GOOD! LETS REPORT IT TO SEGA
hotkeys: D = random, W = upvote, S = downvote, A = back
Feedback