Everything is put in the comments! ^^ 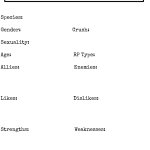 Caption this Meme
Best first
Latest first
Oldest first
385 Comments
-WeirdoMonk- M
2 ups, 2m
Showcase RP:
You’re walking through a forest and hear something underneath some leaves.. it seems to be moving. WDYD?
Known/Public Lore:
Rene was abandoned as a kid by their birth parents. A kind police officer found them and raised them. Rene then found a dragon, and decided to keep it as a pet, not knowing it was illegal. When their adoptive father found out, he didn’t take it away. But when the other police found out, they tried taking it away. Their father refused, and sadly died protecting Rene and the dragon. They went to live in the forest with their girlfriend Mia, but their location is unknown.. supposedly.
Other:
Rene has three dragons, a mother and two children. They train them to be able to protect themselves and Rene and Mia. Rene now has trust issues and attachment issues at the same time.
.-Faker-.
0 ups, 2m,
1 reply