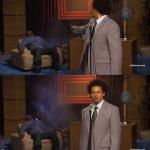 Caption this Meme
Best first
Latest first
Oldest first
13 Comments
JadeTheCrabHighPriest M
1 up, 1m,
1 reply
Maybe you should try to sit down and take with him, tell him it’s serious and that he needs to listen. It might be good for him to know that even though some of it might be being a teenager, the feelings are still real. Explain to him, calmly, that whether it’s just being a teenager or not you feel all those things. Dad jokes are supposed to be how dads bond with their kid, but if they are seriously hurtful you need to tell him. It’s important that you tell him calmly, maybe practice in front of a mirror. Adults tend to disregard you if you are being too emotional. Speak slowly and clearly, and try to communicate how you feel in a way they might listen. You could also write them a letter explaining how you feel, because talking to them face to face may be difficult.
Grayson_Wiggly_Simp
1 up, 1m,
1 reply
Thank you for the support
JadeTheCrabHighPriest M
1 up, 1m,
1 reply
Of course ^^
The first thing to do would be to make a list of everything you need, make sure it is doable for your dad and that it is reasonable. Needing study time is reasonable, wanting to spend more time on electronics should be saved for another day. You want to explain the problem, why it is a problem, and say how they can help. Be careful if doesn’t sound like an attack, because people don’t respond to that. Instead of saying “ITS NOT ALL TEENAGER HORMONES” say “Maybe it’s teenager hormones but that doesn’t change the fact that I am feeling them” The tone of what you are saying is more important than what you are saying, because the second your dad feels like you are attacking him he will stop listening to what you are saying
Grayson_Wiggly_Simp
1 up, 1m
Sounds good
Zoe.Kane
1 up, 1m,
1 reply
tats how us teens r dad
Grayson_Wiggly_Simp
0 ups, 1m
lmao yes
Grayson_Wiggly_Simp
0 ups, 1m,
1 reply
HE THINKS EVERYTHING IS TO DO WITH BEING A TEENAGER
im feeling depressed? its a teenager thing
im ignoring him to focus on my project? im being a stroppy teenager
im crying cause school is stressful? ITS A HORMONAL TEENAGER THING
WHAT. THE. F**KKKKKK
Zoe.Kane
1 up, 1m,
2 replies
yess omg dont they remember any of this
Grayson_Wiggly_Simp
0 ups, 1m,
1 reply
its like they never had teen years oml
Zoe.Kane
0 ups, 1m
yeah its so sad
Zoe.Kane
0 ups, 1m,
1 reply
oh heyyyyy ur the guy/girl/of both/or none/ who simps 4 their science teacher
hows it going
Grayson_Wiggly_Simp
0 ups, 1m,
1 reply
im good how are you also wanna memechat instead of commenting
Zoe.Kane
0 ups, 1m
sure
Show More Comments
Flip Settings

Caption this Meme
Created with the Imgflip Meme Generator
IMAGE DESCRIPTION:
BLATANTLY HURTFUL JOKES ALONG WITH CONSTANT DISTURBANCE; ME; MY DAD; WHY'S HE BEING SUCH A GRUMPY TEENAGER? ME
hotkeys: D = random, W = upvote, S = downvote, A = back
Feedback