Heads Will Roll Because of Botched Afghanistan Withdrawal! 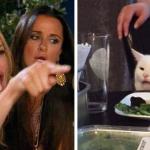 Alas this is true . . . and the Party responsible -- instead of taking responsibility for deliberately putting a dementia patient into the Oval Office -- are collectively pointing the trembling finger of blame rightward and SHRIEKING . . . "It's all Trump's fault!".

Apparently, and according to bleating leftist sheeple, after being eight months out of office, Trump somehow magically MADE Joe Biden become a total and absolute screw-up as Commander-IN-Chief.
Show More Comments
Flip Settings

Caption this Meme
Created with the Imgflip Meme Generator
IMAGE DESCRIPTION:
UNFORTUNATELY NOT THE HEADS IN D.C. BUT HEADS OF ABANDONED U.S. CITIZENS IN AFGHANISTAN; HEADS WILL ROLL BECAUSE OF BOTCHED WITHDRAWAL!
hotkeys: D = random, W = upvote, S = downvote, A = back
Feedback