I don't mean to be rude here but they hardly ever read the rules. Can we just make the rules more visible to them? 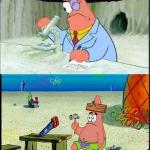 JadeTheCrabHighPriest
2 ups, 9m
the ToS are really hard to find
[deleted]
1 up, 9m
Yep
WiseCracker
1 up, 9m
I've read it, many times - because it's applied differently depending on your protected status.

For example, conservative memes and comments are removed from the site quite often, because of the "kind and respectful" wording in the ToS. However, a liberal creator/commenter is not held to that same standard - they can say, virtually, anything they like with immunity.

All it takes is for a weak-minded or malicious user to say "that's offensive to me" in order to get an opposing viewpoint removed and the author punished. It's an action easily implemented by a liberal, because victimhood is the new currency - whereas to a conservative, purposefully becoming a victim is a foreign concept.
Show More Comments
Flip Settings