If the moderators can see this I want them to comment 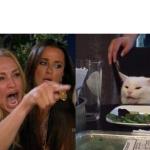 Ixm not homophobic nor an LGBTQ, but some of my friends are

I just hate that people who are LGBT are hated, its f**king sad that these innocent people are hated for who they are

And then theres avortion. JUST STOP THAT SHIT. No person should be hated or killed in any way

Everybody originates from God, stop hating other people for the most basic things about them

I think samsung keyboards are drunk
[deleted]
1 up, 2m,
4 replies
My Apple keyboard:

You dare oppose me mortal
.Thanos.
1 up, 2m
My wireless windows keyboard and wireless mouse with Energizer batteries

Additional note: i am immortal and dont make up a big ass fight
.Thanos.
1 up, 2m,
1 reply
Does Mac have an anime girl
[deleted]
0 ups, 2m
Thankfully it does not
TheRealGiorno
0 ups, 2m
Youre the mortal

Caption this Meme
Created with the Imgflip Meme Generator
IMAGE DESCRIPTION:
It's Adam and Eve not Adam and Steve; It's Addy and Eve
hotkeys: D = random, W = upvote, S = downvote, A = back
Feedback
<![endif]-->