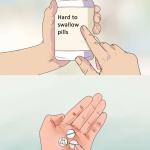 I tried to point out that censoring certain words to protect your kids will only set them up for failure later on when they don't have coping mechanisms and the world figures out that they aren't prepared.

This dude lost his mind. He called me every name in the book for suggesting that his adopted kids won't be prepared to hear the N-word and the world will punish them for it.... A fantasy world is what he wants, but a fantasy world isn't what his kids are going to get.

Good on you!
reply
TheRaven8386
1 up, 2m
It only makes sense to save your sanity. Any person in the medical field for example will tell you you HAVE to desensitize yourself to survive. If you constantly wear your emotions on your sleeve you aren't going to make it. I see this girl on Facebook who makes long winded posts about shootings, injustice what have you and she seems absolutely miserable. They want to believe that one day there will be a world where nobody is judged by skin color, sexual orientation, religion ETC and everybody can live in peace. Sadly that is fairy tale bullshit pardon the phrase. Human nature could never let a world like that happen.
reply
WiseCracker
1 up, 2m
upvoted, by the way
Show More Comments
Flip Settings
memes
gifs
other

Caption this Meme
Created with the Imgflip Meme Generator
IMAGE DESCRIPTION:
UNLESS YOU LEARN TO AT LEAST SOMEWHAT DESENSITIZE YOURSELF FROM THE WORLD'S TRAGEDIES, YOU ARE GOING TO HAVE A LONG AND MISERABLE LIFE
hotkeys: D = random, W = upvote, S = downvote, A = back
Feedback
<![endif]-->