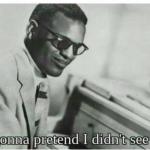 Sad thing is Theres a whole world of memes out there ripe for the picking (the 80s us loaded with memes) but none of them garnish much attention anymore unless their politics/world affairs related. Almost no one memes just for the sake of memeing anymore
reply
100K
1 up, 3w,
1 reply
Yeah, it really is sad, there is so much potential for great memes, but instead, we have people reposting, and upvote begging. It really is sad.
reply
0.O
1 up, 3w,
1 reply
Ive seen a few good ones here from the youngsters, they try but their/your? Generations humor is way different than ppl from my age bracket, I think memes can be saved ppl just need to pull their heads out of politics and stop giving it every second of their day
reply
100K
0 ups, 3w,
1 reply
Yeah, good memes don’t come out of just 2 seconds of thought. Good memes are those that take days, weeks, months, even, to create through heavy thought and contemplation. Not just “Oh, this is popular, I’ll make a meme out of it.” You know?
reply
Jace_Angel
1 up, 3w Not gonna lie, I have a harrowing feeling that ImgFlip will die or end this way unfortunately. No meme is basically good enough compared to back then.

But why not make the best out of it in a lost generation like this, eh?
reply
Very_Creative_Username
1 up, 3w,
2 replies
RePoSt MaN bUt WhY wOuLd YoU rEpOst!!1?1
reply
Very_Creative_Username
1 up, 3w
-a random comment on not a repost.
reply
100K
0 ups, 3w
YeAh, I kNoW, rIgHt?!?11
reply
C0rnd0gz1205_
0 ups, 3w
SAMEEEEE
reply
Have_a_laugh
0 ups, 3w
k
Show More Comments
Flip Settings
memes
gifs
other

Caption this Meme
Created with the Imgflip Meme Generator
IMAGE DESCRIPTION:
ME WHEN I SEE A MEME THAT I HAD AN IDEA FOR:
hotkeys: D = random, W = upvote, S = downvote, A = back
Feedback
<![endif]-->