a wish that will never be granted 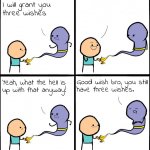 Caption this Meme
Best first
Latest first
Oldest first
4 Comments
[deleted]
0 ups, 2y,
1 reply
I personally don't play roblox, but my younger siblings do, and I just want to say that the reason it censors stuff is so that people don't say inappropriate things.
If it didn't, roblox would probably be super toxic. Just like every other video game and social media app people rant about on imgflip. Everyone would cuss and just say bad things in general; I REALLY don't want my little siblings to be exposed to that stuff, especially since they are all so young.
rabies
0 ups, 2y,
1 reply
aNd YoU dOnT tHiNk i KnOW ThAt?
[deleted]
0 ups, 2y
...Sorry...?
TaskForce141
0 ups, 2y
Roblox about to be a xbox 360 Cod BO2 chat server right there
Show More Comments
Flip Settings

Caption this Meme
Created with the Imgflip Meme Generator
IMAGE DESCRIPTION:
I WISH THAT ROBLOX WOULD REMOVE THE CHAT FILTER SO PEOPLE CAN ACTUALLY HAVE FREEDOM OF SPEECH
hotkeys: D = random, W = upvote, S = downvote, A = back
Feedback