not sure if repost 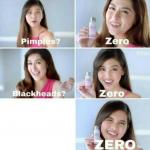 “its not like u can do anything better like read a book or learn something, right??”
Ha ha same to you!

It really is hypocritical to tell me that I shouldn’t be on this site arguing when you in fact are arguing with me.