Take time to consider changing your minds haters, I don't hate back. Everyone has opinions, but please keep harmful ones to your 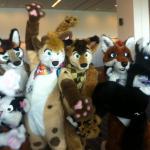 Caption this Meme
Created with the Imgflip Meme Generator
IMAGE DESCRIPTION:
I WOULD JUST LIKE TO SAY THAT, FURRIES AREN'T ALL BAD. PEOPLE HATE THEM BECAUSE THEY'RE DIFFERENT, BUT WE ARE JUST BRAVE ENOUGH TO DO WHAT WE LOVE. THERE ARE MISCONCEPTIONS, LIKE PEOPLE SAY WE THINK WE ARE ANIMALS. THAT IS UNTRUE, THAT IS OTHERKIN. AND NO, FURRIES ARE NOT ALL GAY OR SEXUAL. I KNOW THIS WON'T MAKE HOT, BUT I JUST NEEDED TO GET THE WORD OUT THERE. COMMENT IF YOU SUPPORT
hotkeys: D = random, W = upvote, S = downvote, A = back
Feedback