share
1,285 views • 6 upvotes • Made by Memocrasy 2 months ago
memesevil kermit 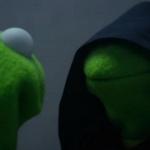 Last was around winter of 2018-19, didn’t have the streams, and all memes just sunk like stones in the ever growing pool of wishful lols
reply
Beckett347
1 up, 2m,
1 reply
Teenagers appear to have taking over the site, and they're making streams at a phenomenal rate!
reply
Memocrasy
1 up, 2m,
1 reply
Getting traction with the youth is a good indicator you’re doing something right!
reply
Beckett347
0 ups, 2m,
1 reply
reply
Memocrasy
1 up, 2m,
2 replies
Maybe that’s a bridge to far,
Beckett347
1 up, 2m
Twice in the last month or so, some ImgFlip user has kind of cornered me and accused me of targeting school kids. I mean he was right, but I targeted them because nobody else was upvoting and commenting on my memes. So in order to garner more points, I was looking around for more people to interact with. And lately the teenagers have been everywhere I look.

Caption this Meme
Created with the Imgflip Meme Generator
IMAGE DESCRIPTION:
HE WAS JUST ASKING FOR AN UPVOTE; EVERYONE ON IMGFLIP IS UPVOTE BEGGING
hotkeys: D = random, W = upvote, S = downvote, A = back
Feedback
<![endif]-->