2,391 views • 84 upvotes • Made by PrinceFabulous 1 year ago
two giants looking at a small guy 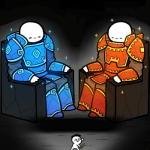 PrinceFabulous
1 up, 1y,
2 replies
He's talking about the echo flower in that picture, but it does still apply to Flowey.
undertalefan121
1 up, 1y
Don't trust any talking flowers...
AquaBlaze_YT
0 ups, 1y
ok
Isaac_Laugh
1 up, 1y,
1 reply
Actually Voldemort failed to take over a high school so...
PrinceFabulous
0 ups, 1y,
2 replies
It was a magical high school with many protective charms and spells. Voldemort would need all of his Death Eaters plus himself just to get through the barrier, as we see in the seventh book.
Isaac_Laugh
0 ups, 1y
Still a high school...
PrinceFabulous
0 ups, 1y,
1 reply
If he tried to take over a muggle high school that has no protective charms, then he would easily be able to penetrate that barrier.
PrinceFabulous
0 ups, 1y,
2 replies
He's didn't have all of his Death Eaters until the seventh book, where he did take over a high school. Specifically, Hogwarts.
TheMemeSupplier
0 ups, 1y
Facts
Isaac_Laugh
0 ups, 1y,
1 reply
Still took him six books...
PrinceFabulous
0 ups, 1y,
2 replies
"Still took him six books." Well, he could only have done it after the fourth, in which he was resurrected. However, he doesn't want Hogwarts, he wants Harry Potter. So he thinks to himself, "What if I lure Harry out of Hogwarts?" This is because Dumbledore is at Hogwarts, and that's why he said Hagrid said it's the "safest place ye' can find." Voldemort lures Harry to the Department of Mysteries in the fifth, but Harry, of course, escapes. In the sixth, his main objective was to kill Dumbledore. Why? Because Dumbledore is the only one he was afraid of. So, Dumbledore was the only one standing between Harry and him. Snape secretly makes the unbreakable vow and kills Dumbledore. Not because of the vow, but because Dumbledore says so. With Dumbledore out of the way at the end of the sixth book, he could only attack Hogwarts in the seventh.
My_cat_meows1853
1 up, 1y
Wow.
I barely read books
Isaac_Laugh
0 ups, 1y,
1 reply
I know the plot of Harry Potter that’s not my point 🙄
PrinceFabulous
0 ups, 1y
Well, just saying that you tried to make a point that Voldemort couldn't take over a high school, so I said why.
[deleted]
1 up, 1y
Voldemort is like a fangirl. He has a tiara, a special cup, a pet he adores, a favorite ring and necklace, a diary, and a strange obsession with a famous teenage boy.

He also failed to take over a school and kill a boy buy thats because of lily’s live and merope’s fault but that stuff you dont care about.... do you?
ihatechildren
0 ups, 1y
JerseyLunaticYT
0 ups, 1y,
1 reply
Voldemort's greatest fear is death, so...
Plankton has broken into the Krusty Krab many times, but never manages to steal the formula
Kokichi_Oma.
0 ups, 1y
then again, Voldemort isn't a midget.
[deleted]
0 ups, 1y
Thats funny, those are the2 villains i think of most Voldemort and omega flowey
Show More Comments
Flip Settings

Caption this Meme
Created with the Imgflip Meme Generator
IMAGE DESCRIPTION:
Photoshop Flowey, a half-god who has killed an entire race and reversed time just to do it again; Voldemort, an immortal man who has killed hundreds of people; Plankton, who has failed to break into a restaurant
hotkeys: D = random, W = upvote, S = downvote, A = back
Feedback