He is the messiah 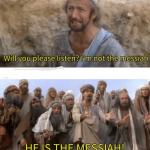 Caption this Meme
Created with the Imgflip Meme Generator
IMAGE DESCRIPTION:
THE SECURITY GUARD WHO GOT THE BASKETBALL OFF THE ROOF; ALL OF THE KIDS
hotkeys: D = random, W = upvote, S = downvote, A = back
Feedback
<![endif]-->