Gengar is one f***ed up Pokemon 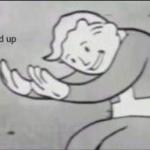 Caption this Meme
Add Meme
Post Comment
Best first
Best first
Latest first
Oldest first
14 Comments
reply
TheDownvoteFairyGodmother
2 ups, 6d,
1 reply
Gengar has been screwed up since the start, This is hardly new... Hold on a sec, I can hear my gran calling from the next room...
reply
MyCollectionOfVeryCrappyMemes
0 ups, 6d,
1 reply
Yes, Gengar has always been one f***ed up Pokemon, but it's probably no worser than Chandelure, who according to it's Pokedex entry states that it can suck souls out of living or dead beings, trapping them in a never ending world of the dead.

To be honest, sometimes I wonder if Pokemon is for kids or not.
reply
TheDownvoteFairyGodmother
0 ups, 6d,
1 reply
Oh Hell it aint for kids, i Doubt it ever was for example; Shiinotic - Forests where Shiinotic live are treacherous to enter at night. People confused by its strange lights can never find their way home again. for gods sake, its entry from Moon tells us that it uses its spores to cause drowsiness and sucks the energy out of its prey when they fall asleep - Such a Lovely Bedtime story
reply
Tre_The_Dragapult
0 ups, 6d,
1 reply
Take a look at machoke too-“The belt around its waist holds back its energy. Without it, this Pokémon would be unstoppable.”
reply
MyCollectionOfVeryCrappyMemes
0 ups, 6d,
1 reply
You guys thought that was scary? Take a look at Phantump...

It's Pokedex entry states that Phantumps are tree stumps haunted by spirits of children who died while lost in the forest.

Now that's some creepy crap!
reply
Tre_The_Dragapult
0 ups, 6d,
1 reply
You should see gorgeist.
“It enwraps its prey in its hairlike arms. It sings joyfully as it observes the suffering of its prey.”
reply
MyCollectionOfVeryCrappyMemes
0 ups, 6d,
1 reply
Hmm... yes, that's a bit creepy, but what about MIMIKYU?

Pokemon Sun entry: "Its actual appearance is unknown. A scholar who saw what was under its rag was overwhelmed by terror and died from the shock."

"A gust of wind revealed what hides under this Pokémon's rag to a passing Trainer, who went home and died painfully that very night."

Are you creeped out now?
reply
99redbaloonsgobye
0 ups, 3d,
2 replies
What about drifloon , WHO LITERALLY carries kids to the afterlife.
Also, pretty much all ghosts in pokémon are dead people.
Imagine being at a funeral, and then a wild ghastly appeared.
reply
Tre_The_Dragapult
0 ups, 3d,
1 reply
How about a pokemon that actually kills your friends? See blu the torchic.
reply
MyCollectionOfVeryCrappyMemes
0 ups, 2d,
1 reply
But wait... isn't Blu the Torchic an creepypasta? Or is it an actual Pokemon.
Just remember that creepypastas are made up horror stories to give people a dark thought about stuff they did in their childhood.
Tre_The_Dragapult
0 ups, 2d
Ah..it is a creepypasta.
reply
MyCollectionOfVeryCrappyMemes
0 ups, 2d
If that appears, hold out the Holy Cross.
reply
Tre_The_Dragapult
0 ups, 6d,
1 reply
I knew it!
reply
MyCollectionOfVeryCrappyMemes
0 ups, 6d
Yes, this is the very one
Show More Comments
Flip Settings

Caption this Meme
Created with the Imgflip Meme Generator
IMAGE DESCRIPTION:
Gigantamax Gengar Pokedex entry Sword: Rumor has it that its gigantic mouth leads not into its body, filled with cursed energy, but instead directly to the afterlife. Shield: It lays traps, hoping to steal the lives of those it catches. If you stand in front of its mouth, you'll hear your loved ones' voices calling out to you.
hotkeys: D = random, W = upvote, S = downvote, A = back
Feedback
<![endif]-->